A Fresh Look at the Wines of Abruzzo – #ItalianFWT

Grapes have been grown in Abruzzo since the Iron age but it was the Etruscans who spread the vine throughout this complicated terroir. The wines from Abruzzo graced the tables of wealthy Romans as well. For a long time, Abruzzo was somewhat under the radar for quality wines and was considered to be a source of a lot of mediocre but inexpensive red and white wine. There were always exceptions to that rule such as Emidio Pepe, who I wrote about over a decade ago here. In 2013, I posted about a Trebbiano d’Abruzzo I loved from Masciarelli, another well-known producer from the region. More recently in 2014 I wrote about Umani Ronchi and their activities in Abruzzo, in  2015, I wrote about Cerulli Spinozzi and their attention to sustainable farming in Abruzzo and Montori and the Colline Teramane, and in 2017, I wrote about Talamonti, another winery from Abruzzo that I am fond of.

Abruzzo is one of Italy’s regions that seems to be having a renaissance in terms of its winemaking and the attention being paid to this area. Located in Central Italy, it is considered to be 65% mountainous and 35% hilly. It also has huge national parks such as the Gran Sasso adn the Maiella. They are also bordered by the Appenines and the Sibylline massif. Apparently they also have the southernmost glacier in Europe, the “Ghiacciaio del Calderone.”

They are certainly hardy folk as is evidenced by their long history and often rugged terrain. Luckily this spirit will help move beyond the terrible earthquakes and other disasters that have befallen the area through the years.

The Western part of the region has soils with loads of calcareous rocks while the Eastern portion has more clay, sand and sandstone and overlooks the Adriatic sea which tempers the climate here and brings cleaning breezes. There is also volcanic ash in the soils and there are  many rivers  which help to create specific microclimates. The climate is a mix,  Mediterranean in coastal areas and Continental farther inland.

With only one DOCG area, the Colline Teramane, Abruzzo is quite well known as an area for wines that have a good price to quality ratio and many are go-to wines for those with by-the-glass programs for both whites, reds and rose –  Trebbiano d’Abruzzo, Montepulciano d’Abruzzo and Cerasuolo d’Abruzzo respectively. There is also a lot of white wine made in Abruzzo from Cococciola,  Montonico, Percorino and Passerina, among others.

Apparently they produce 3.5 million hectoliters of wine per year, 800,000 of it Montepulciano d’Abruzzo. In terms of trellising, the region has a particular style. In the past much was grown on bush vines or on stakes that were attached to trees. Today, 80% of the vines are trained using a pergola system.While I have visited Abruzzo, I haven’t spent nearly enough time there or tasting the wines. While I didn’t receive samples from Citra, a leading winery based in Chieti, the largest province in the region, I know their wines well.  I tasted with Lino Olivastri who is part of their winemaking team years twice through the years at Vinitaly. It was an incredible experience in which we were given different components that make up each of the wines. Citra is a very large company that represents 3000 families who are united in a project that started in 1973. The 19 person wine team also has the advice of consulting oenologist Riccardo Cotarella. For more on Citra, read some of my fellow wine bloggers’ posts which you will find below. Many wineries in the Chieti province and in Abruzzo in general are cooperatives.

It’s been fun looking through my posts on Abruzzo and realizing I have written about the region more often than I thought. Still, I need to take a closer look as things improve and expand my tastings of these wines.

I was lucky enough to have the chance  to participate in a seminar on Abruzzo this past June to remedy the situation. That day we tasted nine wines at the seminar and were able to go to a walk around tasting after. All of them were made from Montepulciano. They were from the five or six different DOCs. There are 17,000 hectares of Montepulciano planted in Abruzzo out of 32,000 hectare total planted in the region.

Montepulciano  can be a vigorous variety if not grown in a meticulous way. It is widely used for its ability to age and for the full bodied, medium tannin wines it produces. I always find that people undervalue wines made from Montepulciano, myself included.

During our seminar we tasted wines from Azienda Tilli, Torne Zambra, Terzini, Citra, Faraone, Agricosimo, Ciavolich, and San Lorenzo. In general, I liked all the wines. I found them to be approachable, enveloping and layered which surprised me. I also found that they really need to be served with food because of the tannins and at times the alcohol.

Azienda Tilli – Located at 400 meters above sea level, the vineyards were planted in 2006 on clay soils. Their Montepulciano d’Abruzzo DOC Lupus 2017 is made from 100% Montepulciano. According to my notes, it was dark ruby red in color with a deep core and floral, black and red fruits came through on the nose. On the palate, sweet cherry jumped out at me as did it’s tannins. Not a complex wine but a well-made one, they are certified organic.

Torre Zambra: The winery is located in Villamagna DOC area in the Chieti province. We tasted their Montepulciano d’Abruzzo DOC Colle Maggio 2014. The wine was very deep ruby, almost opaque. It was very fruity with loads of alcohol. Coming in at 15%, it was a big wine with evident oak notes. The wine undergoes a mixed maturation regime.

Terzini:  This winery is located in the Pescara province. We tasted the Montepulciano d’Abruzzo Vigne Vetum 2015. The grapes are grown at 350 meters above sea level on limestone and clay soils. It ferments in concrete and undergoes a long period of maceration. Deep and rich in color, the wine was very floral, almost lacquered on the nose with red fruit aromas as well. Integrated tannins and earth floor aromas and flavors completed the picture. The 14.5% alcohol begged for food.

Citra: As I mentioned earlier, Citra is a large winery made up of smaller wineries and has some 3000 families involved in its production. We tasted their Montepulciano d’Abruzzo Caroso Riserva 2013. The grapes are grown at 450 meters above sea level. This deep ruby colored wine present fruit forward notes with a backdrop of savory expressions. The tannins were pronounced as was it’s nice acidity. It had good length and depth of flavor. At 14%, this one also needed roasted meats to show it’s best self. 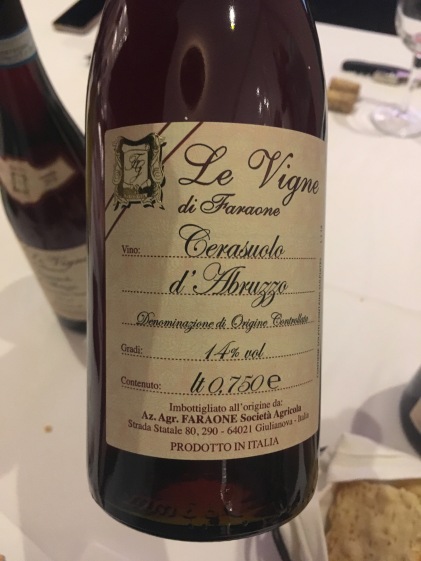 Faraone: This is the first winery that we have seen which is located in the province of Teramo. We tasted their Montepulciano d’Abruzzo DOC Le Vigne 2015 and I also tasted their Cerasuolo d’Abruzzo DOC Le Vigne 2018 upstairs at the walk-around tasting. Their vineyards are lower in elevation, at 150 meters above sea level. and only 5-6 kilometers from the sea. The wine was lower in alcohol than the others, at 13%, was bright in color, elegant, well-integrated and balanced with lovely fruit aromas,  peppery, spice, and cherry, To have the DOCG Colline Teramane, the wine must age in wood for five years.

Agricosimo: Located in the Villamagno DOC area, the grapes for Montepulciano d’Abruzzo Numero 1, 2012 are grown at 250 meters above sea level. Deep ruby in color, small berries and floral notes came through on the nose and on the palate, it shows acidity as well. They make a smaller quantity of wine than some of the others we have seen. At 14%, this wine calls for food to really appreciate all of tis nuances.

Ciavolich: This is one of the older wineries in the area and is also from the Chieti province.We tasted their Montepulciano d’Abruzzo DOC Divus 2016. The vineyards are located at 250 meters above sea level. This wine ages in stainless steel and in oak. I wrote at the time of tasting, that is was rich and fragrant with a long, persistent finish, good tannins and nice acidity.

San Lorenzo: This winery is located in province of Teramo at 250 meters above sea level. We tasted their Montepulciano d’Abruzzo DOC San Lorenzo 2010. Rich, fresh and vibrant for a 2010, the tannins were silky and the fruit that I got on the nose and palate was mature, almost jammy. A lovely everyday wine.

I was impressed with the wines I tasted and look forward to learning so much more about this amazing region.

Below are the the fellow Italian Food, Wine and Travel participants with their food and wine pairing selections.  Join the live Twitter chat this Saturday October 5th at 11am EST at #ItalianFWT.