Mannucci Droandi is a winery in the Valdarno area of Tuscany near the town of Montevarchi. The Valdarno is an ancient wine making region and is part of the province of Arezzo. Wine has been part of Arezzo’s history for centuries.   The Greeks were the first to bring the vine to Italy. After the Greeks, the people living in this part of the peninsula were the mysterious Etruscans. It is not until the 15th Century that we have an idea of how Arezzo’s wines were judged in terms of their quality. An official registry indicated that wines from the Valdarno di Sopra (hill) were considered to be of superior quality while the wines from around the piano di Arezzo (valley) sold for a lesser price. The wines from the Valdarno di Sopra were among those considered to be premium wines. In fact, Cosimo III de ‘Medici in 1716 announced ‘ a “Bando” designating four areas dedicated to the production of quality wine, – Chianti, Pomino, Carmigmano and Vald’Arno di Sopra. 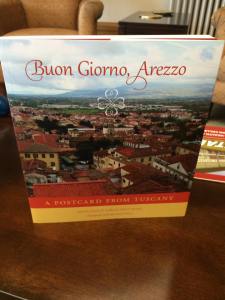 The Mannucci Droandi family has been farming their land for many years but used to sell their grapes until the 1990s when they began making their own wines. The owner, Roberto Giulio Droandi, and his wife, Maria Grazia Mammuccini run the estate They have two properties, the first is the Campolucci property that has 6.5 hectares and is located on the eastern slopes of the Chianti Mountains at about 250 meters above sea level. The family has owned this property since 1929 and its alluvial, sandy, and silt soils are organically certified.

The second property is called Ceppeto and is surrounded by dense woodland. This property is on the western side of the Chianti Mountains at 450 meters above sea level. The soils are a mix of clay and stones and are also organically certified.

Mannucci Droandi has been practicing organic viticulture since 2000. They use what is known as “sovescio” or composting between their rows and have an integrated pest management regime. They believe in a balanced ecosystem on their farm. Hunting is not allowed on their property and they told me they have numerous hare, wild boar and other animals that move throughout their property. Roberto, the owner, told me that his winery is a “happy island unto itself.”

I visited with Roberto and his wife on a very rainy night in November about eight years ago. They were lovely and fascinating to speak with and the wines were exquisite. Roberto reminded me of both a gentleman farmer as well as an explorer.

Roberto’s winery has been a hub for a project with the Consiglio per la Ricerca e la Sperimentazione in Agricoltura; they are working to bring back extinct or nearly extinct Tuscan varieties. While Tuscany and the rest of Italy used to have hundreds of varieties, now they have many fewer because of legislation and market forces. Roberto said he used to have field blends throughout his lands and at one point, grubbed them up. He is now quite sorry he did that. He also found numerous grapes growing on his land that are quite unique.

The study with the university is to see how some of the older varieties can grow today. According to the University, the change in viticulture is a negative consequence of specialization and is harmful for the genetic patrimony of the vine.

Some of the grape varieties that were growing did well on the property while others did not. L’Orpicchio was one that did not do well while others such as Barsaglina, Pugnitello and Foglia tonda did.

The winery makes interesting Chianti such as Chianti Colli Aretini, a blend of Sangiovese 90%, Canaiolo 5% and ancient Tuscan red grapes 5% as well as a Chianti Classico, thanks to their privileged location between Arezzo and the Chianti Classico area. They also make mono-varietal wines from the rare varietals.

The Barsaglina comes from three hectares of alluvial, medium-textured soil located at 250 meters above sea level. They work the land by short-spurred cordon training; summer trimming; bunch thinning; leaf removal and harvesting in stages. The wine is made from 100% Barsaglina. Barsaglina is a Tuscan grape variety originally from the province of Massa Carrara and is also found in the Colli di Luni DOC in Liguria.

They also made a 100% Foglia Tonda, a Tuscan grape variety originally from the province of Siena. They use the same viticulture techniques with this variety as with the Barsaglina. In the cellar, the grapes are de-stemmed and gently crushed and then fermented in small vats (10-15 hectoliters), with prolonged maceration (20 days) and pumping-over alternated with delestage, a two-step “rack-and-return” process in which fermenting red wine juice is separated from the grape solids by racking and then returned to the fermenting vat to re-soak the solids. This step is then repeated daily. The wine is aged for eight months in French oak barrels used for the 2nd and 3rd time and then in the bottle for three months.

They also made a 100% Pugnitello, a Tuscan red grape variety originally from the province of Siena. The selected grapes macerate for 25 days in 10-hectoliter barrels used for the 2nd and 3rd time and then age in the bottle for 6 months.

My visit to the winery was part of a larger visit to the Arezzo area but it is a definitely a place to return to and follow in my chapter in the book, Buon Giorno Arezzo.