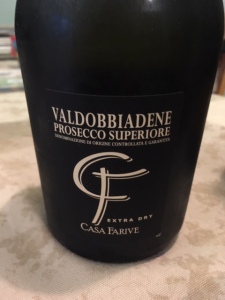 Today’s post is part of this month’s #ItalianFWT event. We are delving into the Prosecco Superiore DOCG denomination which is celebrating it’s 10th anniversary. Camilla Mann is hosting and shared an invitation post here: –You’re Invited: Tanti Auguri (Many Wishes), Prosecco DOCG!!

A number of us received samples from the Consorzio of Prosecco Superiore DOCG,  myself included and we are all thankful. I received three bottles. My title is taking a closer look because like many people I assumed I knew a lot about Prosecco in general. I knew about the different quality levels, DOC, DOCG, Rive and Cartezze. I knew that it is all made with the Glera grape. I knew that most of it comes from the Veneto. I also knew that it is mostly made using the tank method also called the Charmat method. A very small amount of Prosecco is made in the traditional method with secondary fermentation in the bottle or “Col Fondo” or the ancestral method. What I didn’t know was that Conegliano Valdobbiadene became Italy’s 44th D.O.C.G. on August 1st, 2009. The area includes 15 communes. 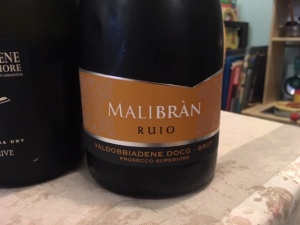 While Prosecco is rightly famous and on all wine lists, at times, just like Pinot Grigio, wine professionals tend to ignore it. I know I have been guilty of this. There are quality differences between Proseccos but many of them have things in common. Be it a light perlage and small fine bubbles, the soft mouthfeel with apples and white peach aromas and flavors. Some of the more refined ones also have yeasty and toast notes as well. Some are sweeter than others but there is a line running through Prosecco which makes it recognizable.

For this tasting, I tried Malibran Ruio. I paired it with Chinese dumplings and Soy Sauce. It was incredibly refreshing and left me feeling like my palate was balanced and it was very satisfying. With 9g/l of sugar and 11.5% alcohol it was neither too sweet or cloying nor too alcoholic. It was just right for the late afternoon on this holiday weekend. The winery has seven hectares, all planted to Glera. They pick it all by hand as well. The wine costs around $15.

Yesterday during our July 4th celebration, I opened the Casa Farive Prosecco Superiore DOCG from Cantina Vedova. This was a Brut version of Prosecco. It had 11% alcohol and 16g/l of sugar. It too had apple and other white fruit notes together with some white floral aromas. Cantina Vedova began in the 1950s. I paired this wine with my absolutely favorite holiday food, especially during a Summer barbecue, hotdogs. The hotdog always has some underlying sweetness with the hotdog roll. It also was nice with the grilled zucchini we had and the watermelon and salad fixings. At around $15, it too was a great wine for a party.

I have not opened the third bottle I received yet but may do so tomorrow and will update this post. For now, I’m feeling very enthusiastic about the Prosecco  Superiore DOCG and the wines that they produce. Sometimes it is important to look at an area with fresh eyes. It’s sort of what I am trying to teach my son as he prepares to move to a new school in the fall – make new friends but keep the old, some are silver and the others gold. I look forward to our conversation tomorrow on this topic.

Join the Conversation
Please join in on our live #ItalianFWT Twitter Chat. This Saturday – July 6th – at 11:00 am EST.  You can follow the main hashtag (#ItalianFWT) and additional hashtags – #proseccosuperiore #coneglianovaldobbiadene #proseccodocg #proseccoelevated – and join in or search for it later and read all the posts.