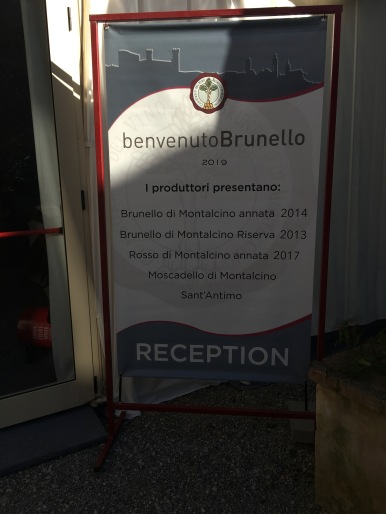 For today’s Wine Wednesday, I want to talk about one of the least mentioned wines from the mecca that is Montalcino, Moscadello di Montalcino DOC. An ancient wine, it was one of the offerings at this year’s tasting at the Anteprime Toscane 2019. I wonder how many journalists actually tasted it. In future years, if I invited back, I think I may taste it first before all of the Brunello and after the Rosso di Montalcino. I have been thinking a lot about tasting order since I came back and I would change up some of my routines. I am happy that I tasted most of those on offer though. I believe nine wines were available and I tasted six of them with my tasting friend from Poland.

It comes in three styles – still, sparkling and late harvest- and in fact the range of wines that we tasted was very different even within the same part of the category – most but not all were of the late harvest variety. I had no idea that it was so varied and was quite surprised. The wine is part of the Montalcino denomination and has many strict rules. It must be made from the white muscat grape within the border of Montalcino. The still and sparkling have low alcohol with a minimum of 10.5% while the late harvest must be 15% ABV minimum.

Generally speaking they were relatively light and refreshing dessert wines, not unctuous or cloying as some sweet wines can be, even to a sweet wine lover such as myself. I tried one from Villa Poggio Salvi called Aurico 2005. The family has 21 hectares and makes a late harvest style of Moscadello. I got vanilla notes and dried fruit from this one, according to my notes. It ferments in small oak barrels after the pressing of the dried grapes so that makes sense.

The second wine I tried was Florus from Banfi. This one was a 2016 version of Moscadello  Also a late harvest version of this wine, this one had more tropical fruit notes and less oak aging. Again, not quite as sweet as some dessert wines I have had. Only part of the wine ages in oak. The grapes used for this wine also raisin on the vine rather than on mats or in crates or some of the ways that other dessert wines are made. This particular wine is widely available in the States.

It had aromas and flavors of pear and floral notes. It is macerated on the skins for two days and then ferments in stainless steel. It then spends 4-6 months aging in bottles before it is released into the market. I found it lighter in style than the other two.  I can see  pairing this one with cheese as well. We also tried a late harvest from Capanna from 2015. I got a lot of lanolin and yeast aromas from that one, interestingly enough. It reminded me of some Chenin Blanc-based sweet wines I have tasted in the past. It spent some time aging in oak but in 5-10 HL Slavonian oak barrels.

The fifth wine was from Caprili, This one was from 2018. This one ages in stainless steel and was the most floral and grapey of the lot. It was the youngest and the freshest of the bunch.

The last wine was from Col d’Orcia, a Moscadello di Montalcino Pascena 2014. This was a more classic dessert wine with honey and apricot flavors and aromas that I would expect from such a historic producer.

All in all, I enjoyed tasting these historic wines. Each was very different than the previous one but all were expressions of what this ancient grape can produce in this historic area. This part of the Montalcino canon of wines should be more widely considered. Perhaps it will be in the future, I certainly hope so.