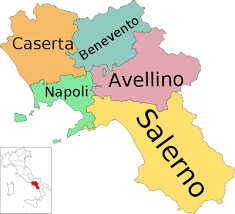 In April 2018, I had the good fortune to attend Campania Stories, an annual wine event showcasing the bounty of Campania. I had been to Campania about five times as a tourist in various parts of the region before that but this was my full immersion into the world of Campanian wines and I have been hooked every since. What an amazing experience in so many ways. We tasted over 200 wines from all of the five provinces in Campania.

It was an eye-opening few days. I have known many people from Campania for a long time and have worked with one for years, Ilaria Petitto from Donnachiara winery in Irpinia. I’ve also done work for other wineries from Irpinia in the intervening years, Feudi di San Gregorio and Tenuta del Meriggio, among others. What I didn’t know was the breadth and depth of viticulture in Campania. Since that time I have hosted seminars and webinars about Campania and have a real interest in all things about their wines. I’ve written many posts about them in the past on here on Avvinare.

When thinking about Campania, it’s history and viticulture, one has to go way back to the Romans when Campanian wines were all the rage. The wine called Falernian which came from an area which today still makes wine was one of the world’s first cult wines. Wines have been made in Campania for more than 2000 years. The story is that the Etruscans brought wines to Campanian in the 6th century B.C.

A couple of key facts to consider when thinking about Campania is their geography. About 85% of the region is either hills or mountains. Only 14% is flat land. Other factors to think about are the plethora of volcanos in the region – Vesuvius, Roccamonfina, the Campi Flegree or Phlegraean Fields they are called in English, and what this means for the soils. When Vesuvius erupted in 79 AD, it of course covered Pompeii as we know but it also spewed lava and volanic ash as far away as Siberia. What does this mean, this means all these years later much topsoil in Irpinia for example, in the Taurasi D.O.C.G. area is volcanic. Volcanic soils tend to act as catalysts for other elements within soils I was told by renowned grape geneticist Attilio Scienza in a discussion we had on the Italian Wine Podcast last month. These types of soils also produce wines with heightened aromatics.

Irpinia was the site of a huge earthquake in 1980 that destroyed much of the area around it and killed and injured about 10,000 people and left 250,000 people homeless. This to say that it is a region which has much history in terms of the soils and the land. 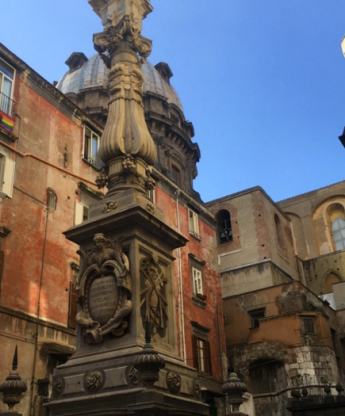 Additionally, much of Campania is on the Tyrrhenian Sea, part of the Mediterranean. Many people when thinking about Campania think of Naples or the Amalfi coast. It is also home to the Archipelago that includes Capri, Ischia and Prochida – fabled islands in the Bay of Naples.

Much of Campania is considered to have a Mediterranean climate but Irpinia, a region in the Avellino province where three of Campania’s four D.O.C.G.’s are located has a Continental climate. It snows there  and did as recently as two weeks ago.

One of the most amazing parts of Campania and it’s wines are the indigenous local varieties that grow only here, both whites and reds.

Among white grapes to know are Falanghina, Fiano di Avellino and Greco di Tufo, followed by Biancolella, Forastera, Pallagrello Bianco, Coda di Volpe, and Asprinio. There are many others but these are just a few of note that make amazing wines. For red grapes, Aglianico reigns supreme followed by Piedirosso, Sciasinoso, Pallagrello Nero and Casa Vecchia. That is not to say they don’t also grow international varieties in Campania, they do. One producer in particular whose wines I love uses international varieties, Silvia Imperato from Montevetrano for example.

With so much to choose from, I invite you to join us on May 2 at 11am EST, the group of Italian food, wine and travel writers (#ItalianFWT) for our exploration of Campania.  I’m going to host the conversation that morning and would love for you to join us. Please send me your titles by Tuesday, April 28 at 5:00p.m. EST. I will post the preview post on Wednesday, April 29. You can find me on Facebook in our group, email me at vignetocommunications@gmail.com or susannah@vignetocommunications.com, find me on Twitter @vignetocomm or Instagram @vignetocomms. Whatever is easiest for you.

I look forward to exploring this amazing region with all of you.