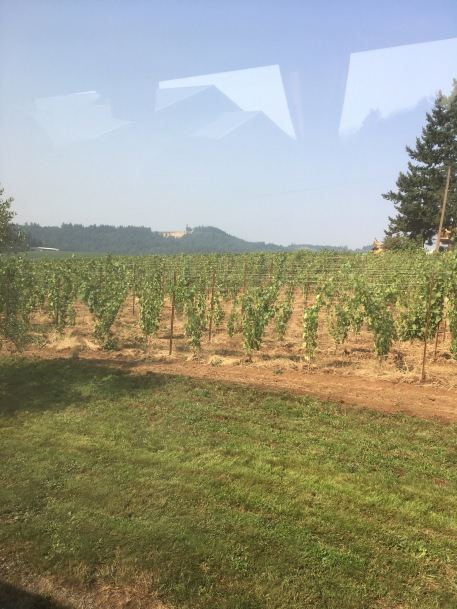 Domaine Roy was the first winery I visited in Portland, Oregon in 2017 during the Society of Wine Educators conference. I was surprised at the size of the winery and sleek nature of the winery. I didn’t know much about it before we arrived and found the visit truly eye-opening. We tasted the Pinot Noir Incline 2014 it had rich fruit notes and a round mouthfeel. While 2014 in some parts of the wine world wasn’t considered a great vintage, as the year of my son’s birth, it is a very special vintage to me. We also tried the 2013 Pinot Noir and a Pinot Noir from Yamhill-Carlton Incline. That one had great minerality and was beautiful, floral and fruity at the same time. It also showed some tea notes.

The history behind Domaine Roy & Fils is very interesting. It began in 2012 when two sons, Marc-André Roy and Jared Etzel decided to follow their fathers efforts. Their fathers had created the very successful winery, Beaufreres in 1991. We visited the Iron Filbert Vineyard and Winery in the Dundee Hills AVA. Formerly a hazelnut orchard, they planted it to Pinot Noir and Chardonnay in 2013. It is a south facing parcel with volcanic soils and Basalt rock. 2015 was their first vintage. Their wines are made from estate and non-estate fruit, currently.

They were lovely hosts and we were all impressed with their attention to quality fruit and the wines. I’m sure they will be hugely successful going forward. I haven’t had their subsequent vintage but imagine they just get better and better. I am reposting this in honor of the last days of Oregon Wine Month.

Join me on Wednesday, April 21st at 11:30am EST/17:30 CET as I host my weekly #winechat. This week I will be speaking with Tali Dalbaha @talidalbaha about her #winejiourney and her company Wines du Monde. #womensupportingwomen #womeninwine #wineinstagram #wineinsta #wineoclock🍷 #vignetocomms #womensentrepreneurship #womeninwinebusiness #winelover
#malbecargentino #malbecworldday @kobrandwines @monteswines @bodeganorton A great way to celebrate this day with two beautiful expressions of this wonderful grape. Black fruit, spice, cedar notes, and forest floor together with silky tannins, make both of these wines great pairings with a grilled steak with chimichurri. Great reminders of how well this grape does in #argentina🇦🇷. #saturdaysips #celebrate #wineinsta #wineinstagram #argentineanwines #vignetocomms #malbecwine #malbec
A carpet of #magnolia leaves-my favorite trees with my special boy. #naturesbeauty #kids #spring #pinkflowers #pinkcarpet #momsofinstagram
Lovely expressions of these areas in Piedmont from @abrigo_giovanni. The Barbera Superior from Diano D’Alba was gorgeous on the nose and palate with fresh red fruit and floral aromas. I got loads of forest floor, bramble and herbs with notes of something balsamic on the finish. This was a big bold Barbera, with 15.5%. The Barolo from #Raveramga was elegant and refined with violet and rose coming through first followed by fruit and some spice, earth notes in a second wave. Long and nuanced, this wine is beautiful today and has a long life ahead. #piedmont #dianodalba #italianwines #womeninwine #vignetocomms #wineinstagram #wineinsta
Join me Friday, April 16th at 1200pm EST for Episode 5 of my #PandemicPivot series on IG Live! I’ll be speaking with the insatiably curious couple from @theconnectedtable, Melanie Young and David Ransom about their adventures this past year on #theconnectedtableroadtrip. We’ll talk about what they’ve seen through the #usa🇺🇸 and learned during this year. #pandemicpivot #theconnectedtable #vignetocomms #roadtrip #homeiswheretheheartis #beverageindustry @ransomwrites @wineandfoodtraveler @melaniefabulous
Join me Wednesday, April 14th at 10:30am EST/16:30 CET for a new episode of my #womeninwine chats. This week I’ll be speaking with Paola Giorgio Novello of @abrigo_giovanni. We will discuss her #winejourney and her #winery in #dianodalba #piedmont. They make wines using #nebbiolo, #dolcetto, #arneis and #favorita. We will also chat about their amazing #niccoleti. #womensupportingwomen #italianwine #italianwineregions