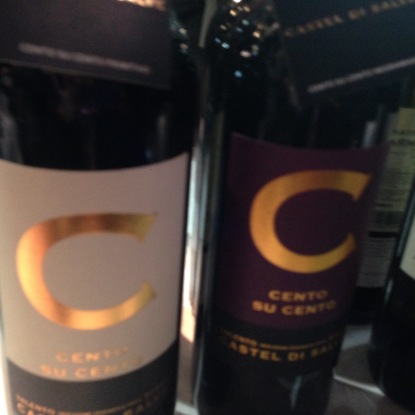 I discovered Castel del Salve one year at Vinitaly. I was tasting Aleatico that year in Puglia and I was very attracted to their modernist labels. I then discovered that they are from a small town in the Salento, Depressa, which oddly enough was home to a woman I had been working with. Of course, they were friends. It’s a small world at the end of the day.

Earlier this year, I had the occasion to taste a number of their wines at the Slow Wine event in February. They didn’t disappoint. What I liked about their wines turns out to be one of their credos, the wines were fresh and not overly fruity. Francesco Winspeare, one of the owners of Castel di Salve stated “the most important thing for us is to preserve freshness and fruitiness because too often in our area the wines are oxidised or over-matured”. I think he and his co-founder Francesco Marra are right on in the direction they have chosen for their wines. I particularly liked Armecolo, made from 80% Negroamaro and 20% Malvasia Nera di Lecce. It was elegant and beautiful as well as approachable. It was not oaked but instead was in stainless steel and bottles before coming to market. It was nice to taste a wine from Puglia that wasn’t overly oaked or a fruit bomb. While many are shying away from those styles, I think you still see them more than I would like.

The Salento is one of the most beautiful places in Italy, which is certainly saying something. I took a marvelous trip there some years ago and spent a glorious week soaking in the beauty, light, sea and hospitality of the people. There are also great towns such as Gallipoli, Otranto and Lecce of course. So much to see and do while drinking all of this great wine.