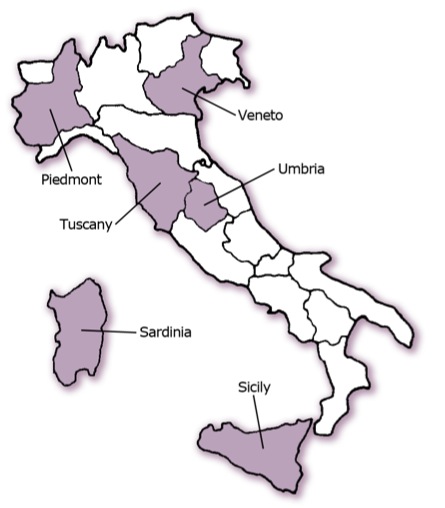 This week’s gem is one I found at the Vinitaly tasting in early February from the Tabarrini winery in Umbria. Most people associate Umbria with big red wines such as Sagrantino but this wine made from the Trebbiano Spoletino grape was a real eye opener for me. Tabarrini also makes Sagrantino but during Vinitaly I was tasting only whites when I tried this wine.

Their winery is located just outside of Montefalco and they cultivate 22 hectares, 11 of which are dedicated to Sagrantino. The winery has been in the family for four generations but it is only in the last 15-20 years that they have begun to bottle their own grapes.

Giampaolo is the current owner of the winery and he runs it with a small team, which includes his partner in life and work – Federica. When he was pouring at the fair, he looked more like a race car driver, decked out in black sports clothes. A nice change of pace from what you usual see at these fairs.

The wine that I tried is an I.G.T. Bianco made from 100% Trebbiano Spoletino. The vineyard is at 350 meters above sea level, faces South-East and the vines are between 50-60 years of age. From what I read, the vines are planted on their own root stocks as well. There are 3000 vines per hectare. The wine spends about four months in stainless steel before being released. Some 3500 bottles are produced.

I thought the wine was beautiful with white fruit and floral notes, more citrus notes than tropical. It also had good minerality, acidity and some sapidity to it with a hint of an earthy character. In Italian you would say it brought forth the idea of the “macchia mediterranea.” Loosely translated that means the scrub bush you find in Italy around the coast that often smells of rosemary, thyme, linden trees, etc. I thought it was fairly complex for a Trebbiano albeit it was my first Trebbiano Spoletino. From some internet research, it appears that it is not genetically related to the more well-known Trebbiano Toscano.

Here’s a long interview with the winemaker on another wine site called Tuscan Vines. A couple of places in New York sell this wine that I found on wine-searcher.