Umani Ronchi is certainly one of the most famous producers in Le Marche. In fact, it came as no surprise to me to see that they won a Tre Bicchieri award for their Castelli di Jesi Classico Verdicchio Plenio Riserva 2010.

This was also a great occasion for me to once again taste some of their other fabulous wines such as the Rosso Conero Cumaro 2009 and Marche IGT Pelago 2009.

I am thrilled to have been able to taste the newer vintages of these wines because I attended a lunch in September 2012 with Michele Bernetti hosted by their importer Bedford International and organized by the lovely Aileen Robbins of Dunn Robbins and was able to taste through their older vintages. I was happy to be able to go back to those notes and compare them with what I tasted two weeks ago.

The winery has been in the Bianchi-Bernetti family for almost fifty years. It was established in 1957 by Gino Umani Ronchi at Cupramontana, in the heart of the production area of Verdicchio Classico. Roberto Bianchi and his son-in-law, Massimo Bernetti, joined the company a few years later. Michele began working with his father, Massimo and his uncle, Stefano in his teens but officially joined the winery after University and a stint in London working for their importer. He is currently the CEO of the winery. Michele is the third generation of his family to run Umani Ronchi.

Umani Ronchi is very active in two areas in Le Marche which produce beautiful wines – Castelli di Jesi and Rosso Conero, where Verdicchio and Montepulciano grow, respectively. They also own an estate in Abruzzo in the Colline Teramane denominazione d’origine controllata e garantita (D.O.C.G.) area. Umani Ronchi sees it as its mission to promote the wines of these two regions – Le Marche and Abruzzo. The winery promotes quality wines from both its indigenous and international varieties. They have more than 200 hectares under vine. They make a host of wines, both red and white.

Le Marche has very favorable growing conditions thanks to its location on the eastern coast of Italy. It has long hours of sunshine and cool sea breezes which keep the vines cool and healthy.

The wine that won the Tre Bicchieri, Plenio Riserva 2010, was a beautiful expression of aged Verdicchio with great acidity and nutty, ripe fruit, floral and almond notes thanks to its aging regime. It is made from 100% Verdicchio from vines that grow in one of the areas historically regarded as most suitable for the production of Verdicchio, near the village of Cupramontana. The vineyard is situated at about 350 meters above sea level, with an eastern-facing aspect. The soil has very deep clay loam, with poor fertility.

In terms of vinification, fermentation takes place in part (60%) in temperature-controlled stainless steel tanks, while the rest ferments (40%) in 5000 liter Slavonian oak casks. Some 10-15% of the wine undergoes malolactic fermentation. The parcels are then blended. This vinification regime lasts about 12 months, during which the wine remains in contact with its lees. Plenio completes its aging with a further 6 months in bottle.

The name Plenio means round, complete and ample in Latin and the Riserva did its name justice. They also make other versions of Verdicchio which should be mentioned including Vecchie Vigne, Casal di Serra, among others. I was able to try these wines in 2012 and they were exquisite. I particularly remember the Vecchie Vigne Casal di Serra from 2007 and 2009. This wine sees no malolactic fermentation. My notes show that I thought these wines were quasi reminiscent of wines from Alsace with white blossoms, almond and honey notes paired with the great acidity of the Verdicchio grape.

In terms of their red wines, the family were among the first to champion red wines from Le Marche. The reds tend to come from the Rosso Conero area. My wine of the week this week is their Cumaro which I tasted again at the Tre Bicchieri on February 6. I had done a vertical tasting of it back in 2012 of the 1995, 1997, 2001, and 2007. This wine is only produced in great vintages. This time I tasted the 2009 Riserva. On both occasions I was impressed with what they do with the Montepulciano grape.

The grapes that make Cumaro are produced in a south-east facing vineyard called “San Lorenzo” at about 150 meters above sea level. It is close to the sea with highly calcareous soils. Cùmaro means Komaros in Greek and is a tribute to Mount Conero. The Conero Riserva wines were awarded the coveted D.O.C.G. designation in 2004.

Montepulciano is a late variety ripening variety. The wine ages in barriques for 12-14 months and then spends about 6-8 months in the bottle. They produce about 46,000 bottles of this wine a year.

This wine was very deep ruby red in color with garnet notes on the rim. On the nose it showed ripe dark fruits, spice, vanilla and tobacco. On the palate it was tannic with chocolate and oak flavors but I also detected a hint of minerality. This is a powerful, full bodied, harmonious wine which we had with a steak during the lunch in 2012.

Another wine I want to mention is the Marche IGT Pelago which I also tasted both in 2012 and at the Tre Bicchieri. In 2012 we tasted the 1995, 1997, 2001 and the 2007 vintages. Recently I tried the 2009. This wine is a blend of Cabernet Sauvignon, Merlot and Montepulciano. After malolactic fermentation, the wine is transferred to barriques for aging, for a period of 14 months. Pelago then ages for a further 12 months in the bottle. 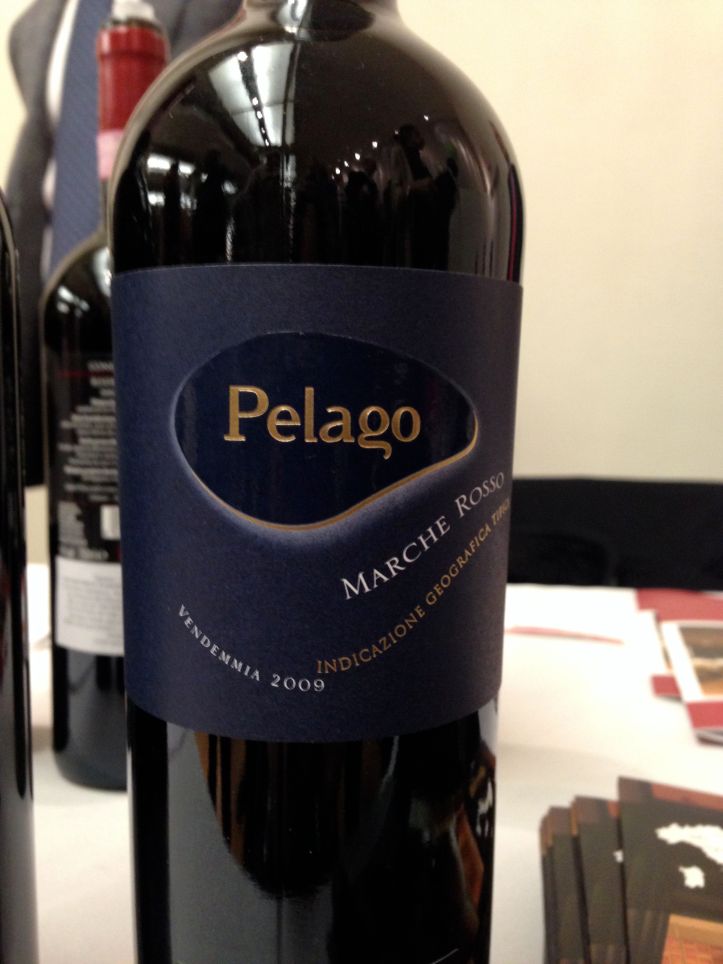 It made a big splash when it was first launched in 1994. It was and is a big, juicy wine with rich aromas and flavors of black fruits and berries. It too had the minerality that I found in the Cumaro. It was created by Giacomo Tachis, the famed Enologist who created Sassicaia.

During the 2012 tasting we also tried two additional wines made with Montepulciano, Jorio and San Lorenzo. The former comes from their vineyard in Abruzzo while the later from the Rosso Conero. It was interesting to compare the two variations on the theme of Montepulciano.

I have never visited their vineyard but I did spend a wonderful holiday in Le Marche years ago, traveling around the area and discovering unknown wines. It was truly magical and at the time undiscovered. Le Marche has a lot to recommend it as a region whether its the wine or the food or the beautiful art treasures to be found in Urbino or at the Sanctuary of Loreto. Absolutely worth a trip.