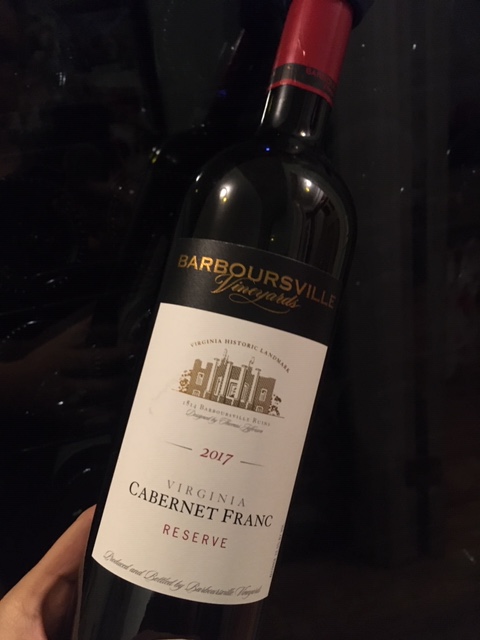 Last week I had the good luck to meet Luca Paschina for the third time at an event in New York on wines from Virginia. All of the wines showed beautifully but I have a soft spot for those from Barboursville both because they are extremely well- made wines and because they were my first entrance into the world of Virginian wine. I wrote this post back in 2011 about the winery. I have been drinking a bottle of their Cabernet Franc Riserva from 2017. It has both power and finesse as well as lovely red cranberry and black plum, spice, and bramble notes. It is just what I have been in the mood for this past week although had I saved it for Thanksgiving, it would have been a nice pairing with various elements of that meal too. Perhaps I will get a bottle to bring to our celebration.

I’ve wanted to visit the Barboursville Winery in Virginia for about four years or ever since I picked up a brochure on Virginia wineries and what great stuff an Italian named Luca Paschina had been doing with grapes, especially Viognier in that area. He was working at Barboursville which is owned by the Zonin family from the Veneto. Thomas Jefferson, once a residence of the big white house in the picture, actually designed the original home at Barboursville.

Barboursville is an odd combination of American and Italian touches. The restaurant, aptly named the Palladio – both for the Zonin’s heritage from the Veneto and Jefferson’s preferred building style, served a lovely combination of Italian specialties with an American flair. The head sommelier of course hailed from Italy and is a member of the Italian Sommelier Association, as am I.

Barboursville is very famous for a wine called Octagon which President Obama drank at the inauguration. It is a blend of Merlot, with percentages of Reserve Cabernet Franc, Cabernet Sauvignon and Petit Verdot. The wines are vinified separately and then blended. They are fermentation in stainless steel tank for 5-7 days, then macerated for 10-20 days. It is then aged 12 to 14 months in barriques of new French oak and then spends six months in the bottle before release. This is their flagship wine. 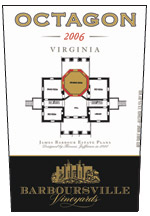 I actually prefer the Cabernet Franc on its own and the Viognier which I thought was just splendid. I was also lucky enough to dry a dessert wine made from Malvasia on a visit to the winery in October and then at the Italian Embassy in Washington at a Vinitaly event.

Still, it is the Viognier which stole my heart. It is fermented in stainless steel, does not spend any time in wood, and instead goes through extended lees aging. This brings wonderful nutty and toasty notes to this wine which also has lovely fruit and floral aromas and flavors. I had this wine with lobster this summer on Cape Cod and it was perfect.

I’ve visited this winery twice now and highly recommend it as a day trip from Washington, DC or as part of a Virginia Winery tour. I’ve been a Jefferson fan since I was a little kid because of my Dad so this was a special trip for me and a perfect wine for President’s Day.