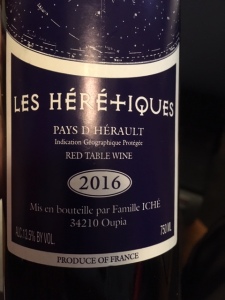 This Wine Wednesday is dedicated to Chateau d’Oupia‘s Les Hérétiques Pays D’Herault 2016. Made with old vine Carignan, it is lovely with dark plum fruit aromas, earth and spice in the mix. According to the website of their importer, Louis Dressner, “half of the wine is fermented in barrel with a maceration of 30 days. The other half is made by carbonic maceration.” I get some woody flavors on the plate but they come amid the third wave of flavor not right on the attack. It also has some acidity which I like in red wines, oddly enough.

This winery is run by  Marie-Pierre Iché. Her oenologist is  Laurent Batlle who came into the winery the year after his father André passed away in 2007. Her father had inherited their 12th century castle and vines. A man who went his own way, he never joined the local cooperative. Cooperatives are very big in the Languedoc regiion. While they have 63 ha, it is in two distinct, they make wines under two different classifications – MInervois wines based on Syrah, Grenanche and Mourvedre and VDP Pays D’Hérault. 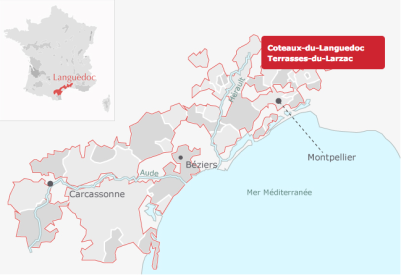 Many of the Hérault  vineyards lie on the coastal plains in the Languedoc. The climate is decidedly Mediterranean. As  a designation, the Pays d’Hérault IGP allows producers to add international varieties such as Cab and Merlot but this wine is strictly old vine Carignan and it is lovely. The Languedoc has so many designations that it can become confusing. Vin de Pays D’Herault is one that can use this departmental designation or the regional designation Vin de pays d’Oc.