When one thinks of Lombardy or Lombardia as the Italians call it, they don’t often think of wine. Milan, the principal city in the region, is known for finance, fashion, industry and much else. Wine is never what one first thinks of although even Milan has it’s own DOC. San Colombano d.o.c. wine. This is the only DOC wine produced in the province of Milan. It was designated a DOC in 1984.Wines from San Colombano are generally made from Croatina, Barbera and Uva Rara for the reds in order to be part of the DOC. Some international varieties have been planted in recent years as well. For the whites, a number of grapes have been used in addition to the indigenous variety Verdea. The soils in this area are a mix of calcareous soil and sand. The wines they produce are easy drinking wines that complement the local food perfectly. The grapes for production of San Colombano DOC wines must be cultivated exclusively in the Comune of Miradolo Terme and Monteleone in the province of Pavia, Graffignana and Sant’Angelo in the province of Lodi and San Colombano al Lambro in the province of Milano. 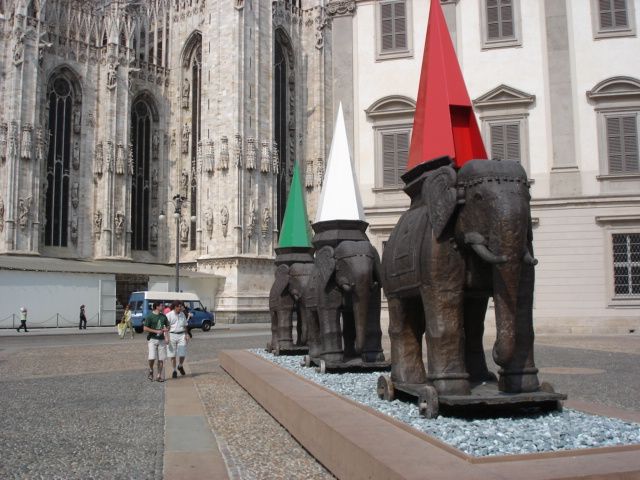 Milan is not the only Lombard capital to be home to a wine region, most of the top cities in the region are related to a DOC. For example, Bergamo, is home to wines from the Valcalepio. Bergamo and its wines from the Valcalepio, are still quite unknown in the US but also in many parts of Italy. The Consorzio Tutela Valcalepio was founded in 1977 by 22 members. The area is in the province of Bergamo and has two main wines that are allowed to have the DOC denomination. The Valcalepio Rosso DOC is made from Cabernet Sauvignon (25%-60%) and Merlot. The grapes are harvested and fermented separately. The wine is then blended and aged. If aged for three years, at least one in wood, it can be called a Riserva. Of the 400 hectares that go into making wines in the Valcalepio area, 70% are used for the Valcalepio Rosso.

The Valcalepio Bianco DOC is made from Pinot Bianco and Chardonnay (55% to 80%) and Pinot Grigio (20% to 45%). In addition to the DOC wines, a line of IGT wines are also made including a traditional method sparkling wine.

No post on Bergamo and the Valcalepio can be complete without mentioning the Cantina Sociale Bergamasca. They produce wines using the Terre del Colleoni or Colleoni DOC denominations, a DOC created in 2011. This cooperative was founded in 1957 in San Paolo d’Argon. It has 150 members and 160 hectares of vines. The coop produces some 800,000 bottles annually and exports currently 10% of its production.

Another city that is host to famed wines in Lombardy is Brescia. Brescia is a city that is surprisingly interesting and rich in art, culture and even Roman ruins. Brescia, Lombardy’s second largest city after Milan, is often thought of as a small industrial town in Northern Italy, perhaps worth a few hours to see the Duomo, have lunch and then continue on to its more well known neighboring cities. On closer inspection however, Brescia reveals it’s exciting and varied history as well as numerous treasures. Brescia is known throughout Italy for its steel industry and precision instruments. The city is quite well to do and the wealth and prosperity of the city is clearly evident in the high quality shops, stores and restaurants. These last are considerably more expensive than even those of its larger neighbor, Milan. An itinerary through the city of Brescia can be created around various themes such as Roman, Medieval, Renaissance, and 17th century architecture. The city can be well navigated on foot from the central station, by bus, car or on bikes. Like Bergamo, Brescia is a great side trip if you are in Milan. As you might have guessed, I wrote a long travel article on Brescia for a magazine some years ago. Brescia is the town closest to Franciacorta. Franciacorta I am a huge fan of the sparkling and still wines that hail from Franciacorta. To me they can rival Champagne and should grace every wine list and table.

Near Brescia are a number of other regions that are a bit less well-known such as San Martino in Battaglia DOC.Lake Garda is also home to many fine wines. I first discovered Lugana, a white wine from the area around Lake Garda, some years ago when I met a producer from the region. I had never heard of the wine in the past. I was duly impressed with its full body, good minerality and acidity as well as soft and appealing flavors. I tasted some very young Lugana and some with a bit of age on them, also impressive. I began to be intrigued as to why this wine wasn’t more popular both in Italy and in the U.S. I think I was just a bit ahead of my time because of late Lugana is making ever more frequent appearances in wine shops and on wine lists throughout both the US and in Italy. Once you try Lugana, you too will be of the same mind. The wine is made with the Turbiana grape, a local name for a clone of Trebbiano that only grows in this area that straddles both the Lombardia and Veneto regions. The biggest market for Lugana is Germany, no surprise to anyone who has spent time on Lake Garda where 90% of the tourists seem to come from Germany. “We were some of the first wineries to participate in Prowein, over 20 years ago. Germany is only four hours from Garda so you can see why it is such a popular destination. About 12 million bottles of Lugana are produced each year and they usually finish their wine in the cellars by mid July.

Another area for wines is around the beautiful city of Mantova,the Colli Mantovani is actually on the border between the Veneto and Lombardy that also makes DOC wines. These wines are made from a blend of indigenous and international varieties. The wine that stuck in my mind was their version of Lambrusco, typically a grape that brings one to think of Emilia Romagna not Mantova.
Lambrusco Mantovano has been a DOC since 1987.

I couldn’t forget to mention the wonderful Pinot Nero wines coming from the Oltrepo’ Pavese area, near the city of Pavia. I especially like the wines made by the Conte Vistarino family which apparently introduced the grape to the region in the 1800s.

Perhaps I left someone out but for now, this post is long enough and hopefully shows some of the amazing wealth of wines from Lombardia, a region I love and where I lived for 10 years and which I consider a second home.

Join our Twitter chat Saturday May 7th at 11am EST @ #ItalianFWT to chat about Lombardia. Plus, don’t miss next month as we feature our last region of Italy, Liguria.  This will complete our first full tour of Italy.  See you June 4th!

Vino Travels –  Chiavennasca of Lombardia vs. Nebbiolo of Piedmont

The Wining Hour –  Vines and Views of Valtellina Valley

8 thoughts on “Lombardia: A Wealth of Wine”