On June 24 each year, Florence comes alive with parades and Florentines dressed in medieval gear to celebrate their patron saint, San Giovanni. Drums beat and flutes play, as the procession leads to Piazza Santa Croce for the yearly Calcio Storico match. 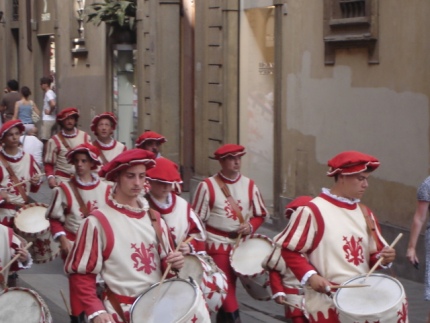 Calcio Storico began in the 16th century. The rules are slightly different from regular calcio or soccer. Three matches are played each year. Head-butting, punching, elbowing, and choking are all legal. A violent match, sometimes people get hurt but it never seems to dampen anyone’s enthusiasm for the game

I lived in Florence for many years and often tried to see the match but never made it anywhere near the grand stand. In the evening, fireworks are launched from the Piazzale Michelangelo. Last year and the year before I watched the fireworks from different locations in the city with people very close to my heart.

I was lucky enough to be at a party in a home smack underneath the fireworks display. It seemed like the raining white weeping willow like shapes were all around me. It was slightly terrifying and glorious at the same time.

On June 24, Florentines also pick walnuts to make into the delicious digestivo Nocino, a walnut liquor. The green hulls of walnuts are infused in alcohol for two months and then some spices are added to the mix. I have never had one in the United States but two brands seem to be prevalent, Russo and Agazzoti. A Nocino also comes out of California. 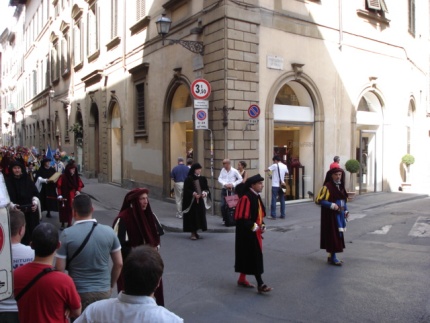 I have only ever had homemade nocino made by Silvia Di Sandro, a cook who could put any famous chef to shame.

While Florence can be extremely touristy, hot and commercial, it holds a very special place in my life and in my heart.

Whenever I go back there and hear “O Susannah dov’e sei stata tutto questo tempo?…(where have you been all this time?) said with a thick Florentine accent by one of the people who run the cafes, restaurants or stores on my old street, I smile and feel like I am always at home. I actually think the air is slower and heavier in Florence but that’s another story. If you ever get the chance to go on San Giovanni, I don’t think you will be disappointed.