A Window Into The Côtes du Rhône Through Maison M. Chapoutier

While many people know of my connection to Italy, the real truth is that France and all things French were my first love. I lived in Dijon during University, was a French language and literature major in college and to this day associate much of my childhood with trips to France (read Dad’s love of French culture). Everything’s better in France he would say when I was growing up. Visiting the country, drinking the wines and eating the food through the years, I can see why. Yet, one area I have not visited physically is the Rhône Valley. Thanks to the #Winophiles, I get to visit virtually every so often and this month is one of those times. There’s a lot of history here as you can imagine. Read about  the Côtes du Rhône here in our host Camilla’s post. Here are a few salient facts about the Côtes du Rhône, a region-wide appellation.

The Rhone Valley is my go-to area on any wine list when I do not know the wines or producers. I have heard it said, when working in retail as well, that the  Côtes du Rhône has something for all palates and price points and I think that is a truism. I also think it’s a place where you can send those unfamiliar with old world wines.

Michel Chapoutier it seems also has wines for everyone. Through the years I have tasted a host of wines from this exciting winery. Michel Chapoutier’s great-, great-, great-grandfather Marius purchased an estate and some vineyards in Tain l’Hermitage in the Northern Rhône Valley and the winery was founded in 1808.

Michel Chapoutier is the 7th generation to run the winery which he took over in 1990. He made the winery 100% biodynamic in terms of viticulture and has eliminated all fining and filtration during vinification.

The family motto is Latin “fac et spera” or “create and hope.” This is Michel’s philosophy and is emblematic of his minimal interventionist philosophy. He believes in letting Mother Nature do her work. 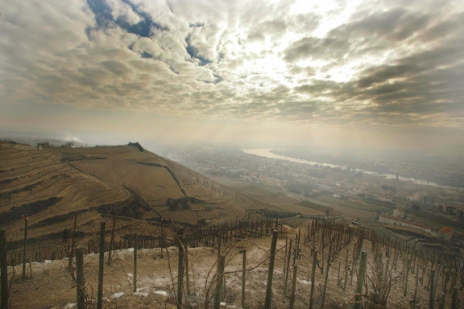 Chapoutier offers many wines from the Côtes du Rhône  appellations, including CDR Villages and CDR named village wines.  Belleruche is their best seller. The name means “beautiful beehive” in French. As with many healthy vineyards, bees and and insects prosper in the sustainable and biodynamically farmed M. Chapoutier vineyards.

We must mention the labels when speaking about Chapoutier. He has featured Braille on his wine labels in 1996 to pay homage to one of the region’s most famous sons –Maurice de la Sizeranne.  Maurice de la Sizeranne became blind at the age of 9 and grew up to be incredibly successful and impactful to the community, creating an abbreviated way to write Braille.

Chapoutier offers a host of  CDR white and red wines from these appellations without apparently seeing them in competition with one another.

Côtes du Rhône wines are generally quite affordable, full bodied, with red fruit and with 13%+ alcohol and nice structure. I always get bacon, band-aid and savory notes from Syrah while Grenache is more bright cherry fruit and freshness. A friend who speaks French but is not a wine buff said he always orders a  Côtes du Rhône when asked to choose a wine from the list because he knows he will get a good wine without having to know the producer or spend too much.  Côtes du Rhône wines are those great everyday wines that you can pair with Pizza or a bigger dish without worrying too much about the pairing because they are so versatile and easily complementary.

The Rhone Valley is a whole world of wine and once upon a time, I was studying for the Rhone Valley certificate at the then French Wine Scholar program. Years have past, the organization is now called the Wine Scholar Guild. Maybe it’s time to hit the books again.

I did not pair this wine with food but if I had. it would have been the pot roast I made for the Jewish New Year last night. My dish wasn’t particularly seasoned except for some smoked paprika, salt and pepper but these CDR wines would have been a successful match.

This month the French Winophiles are exploring the Côtes du Rhône region in southeastern France. Check out more articles from the group at the bottom of this post and join our Twitter chat on Saturday, September 19th, 2020, at 11:00 AM ET. Follow the chat using hashtag #winophiles.…