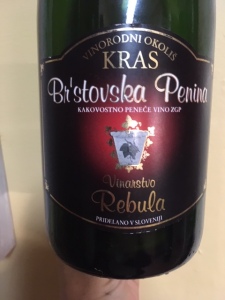 Today’s wine of the week hails from Slovenia. I was gifted this red sparkling wine made from what they call Teran, a local variety, last year at the American Wine Society conference by Martina Rebula. The family farm is called Rebula.  The farm Rebula dates back to 1900. This family run farm is managed by  Dušan, Vida, Martina and Roman Rebula. They grow Malvasia, Vitoska, Sauvignon, a variety called Grganja and Refošk from which Teran is made. They follow integrated farming methods.

Martina is apparently a local celebrity. In 2006, she was crowned the “first Queen of Teran, the harbinger of wine culture…”

Teran is apparently their name for wines made with Refosco which they call Refosk.  I opened this bottle last week. It was very dark in color, almost black, with berry fruits, with a nice perlage,  and soft spice and earth notes. It had silky tannins and a long finish. I have never had the Slovenian version of this variety so I was not entirely sure what it would taste like. Slovenian wines are still a mystery to me in so many ways but the country seems beautiful and the wine producers I have met have been lovely. According to their website, this wine comes from the Brestovica Valley. The soils in this valley are apparently rich in minerals and Karst red soil. They are also buffeted by the local wind which is called the Burja in Slovenia. Everything has it’s counterpart over the border in Italy, in Friuli Venezia Giulia so on the one hand everything seems very familiar to me and on the other, very foreign.

Apparently they usually serve this wine with ham, salami and strong cheeses. I can definitely see why. I had it with a spiral ham which was delicious.