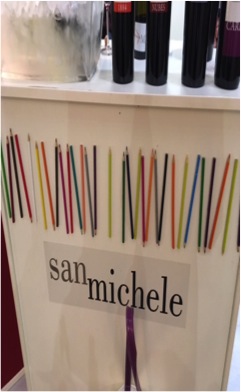 This week’s winery of the week is Cantina San Michele. They are from Capriano del Colle, a region near the Lombard city of Brescia. I met them this year and found them and the wines very engaging. I also love their graphic identity.  The winery was founded in 1980. They are  near Monte Netto, which they call an island, that emerges from the plains south of Brescia. The winery is part of the Consorzio Montenetto. The winery is managed by a young team, Mario and Elena, both under 30 years old, who are cousins. They have 16 ha of vineyards and are converting to organics. The vineyards have chalk-clay soils and they are focused on indigenous grapes Marzemino and Trebbiano di Lugana. The average age of their vines is 15-20 years old, except for one vine which is 60 years old, and which they named Cirillo after the person who tended it. They make field blends.

One of their signature wines is their Marzemino. This wine undergoes a controlled fermentation for 10-15 days in stainless steel and cement tanks. They have two plots planted to Marzemino called Rose sopra and Rose sotto. Marzemino was brought to Lombardy  by Venetian merchants. Some 15 years ago the University of Milan did a study

on Marzemino clones. San Michele uses Guyot trellising. They assign colors for all of their wines. Indigo was chosen for Marzemino, they consider it spiritual, linked to searching. This wine has 13% minimum alcohol and retails for SRP $15-$18. I really liked it’s violet aromas with a hint of acidity, good structure and some earthy notes. 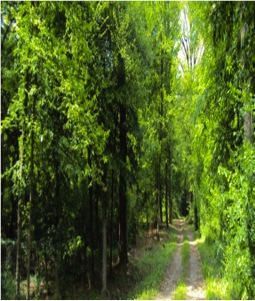 Capriano del Colle is a region I knew nothing about until I did a seminar on Lombardy this summer for the Society of Wine Educators. I met Mario and his cousin in April at Vinitaly Capriano del Colle is one of the DOCs from the area near Brescia,  San Michele is in the Montenetto Consortium which has 25 wineries and 110 hectares. Monte Netto or Monte di Capriano is at it’s highest point 133 meters above sea level. It is 15 km south of Brescia. The mountain is 4 km long and 2.5 km wide and can be considered an altoplano or high plain. They found paleolithic ruins, 300,000-10,000 years ago, in this area and Roman necropolis in 1931. There are chalk-clay soils in the Parco di Monte Netto. The whites are made with Trebbiano di Soave and Trebbiano di Lugana while the Colle al Capriano DOC Rosso & Rosso Riserva are made with a min of 40% Marzemino, min 20% Merlot, and a min 10% Sangiovese.. The alcohol tends to be around 12%. They also make a novello version with carbonic maceration

A morning visit from a #deerfamily #nature #naturelovers #deer #mulberries #breakfast #whitetaildeer
Join me for a #womeninwine chat with Marianna Cardone from @cantine.cardone at 12:00pm EST/18:00CET on Wednesday, June 9th. We will discuss her #winejourney, her #familywinery, wines from #puglia and from the #valleditria and particularly from the #verdeca grape. See you tomorrow. #vignetocomms #italianwineambassador #italianwine #italianwinescholar
Join me for a #womeninwine chat on Wednesday, May 26th at 12:00pm ET/18:00 CET as I speak with Andrea Lemieux of the @quirkycork.. We will discuss her #winejourney and the wines of #Turkey. Hope you can join us. #womensupportingwomen #wineeducation #winelovers #wineinstagram #winegeeks #vignetocomms #turkishwines
Join me tomorrow on Clubhouse at 10:00am ET/16:00 CET as I speak about #iGroppello with Luca Formentini of Selva Capuzza winery. #italianindigenousgrapes
#verdeca in three versions from the #valleditria.#cardonevini. Loving all three of these wines and the vibrant acidity and salinity I am getting. Verdeca, an #italianindigenousgrapevariety, should be on everyone’s radar. Still, sparkling and sweet, this versatile, easy to pronounce grape from #puglia is a keeper.I can’t wait to try more. #locototondo #italianwines #wineinstagram #vignetocomms
Join me on Monday, May 17th at 12:00pm/18:00 CET for a #winechat with Egle Capilupi Armani from @cantina_albino_armani. We will discuss her #winejourney, her #familywinery and their #pinotgrigiowine from five different #terroir. Let’s celebrate #pinotgrigioday with Egle. Hope you can join us. #womeninwine #womensupportingwomen #triveneto #italianwines #pinotgrigioday2021 #wineinstagram #sustainability #wineinsta #vignetocomms #italianwineducation