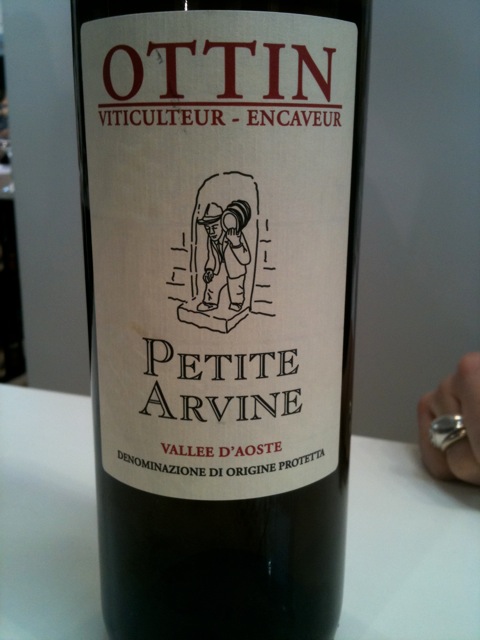 This week’s blizzard has really made me miss ife on the slopes, all of it. I always remember the panini with speck and asiago cheese that I would eat when skiing in Italy and the desire to drink Vin Brule but the knowledge that too much of it would make me a worse skier. Hopefully, a settimana bianca will again be part of my life as Niccolo’ learns to ski and wants to go. It’s a great tradition in Italy that I miss.

This week’s wine of the week for wine wednesday is about Petite Arvine from Ottin. It was very clear and crisp with nice minerality and acidity. A straight-forward wine, “franco” the Italians wood say.

This is a fresh and friendly white wine which is a perfect drink on the mountains after a tough day on the slopes or after a hike in that beautiful countryside. I’ve always had it with mountain cheese such as Fontina DOP, charcuterie such as Jambon de Bosses DOP, Lard d’Arnad or alone as an aperitif.

I wish I had great pictures from the Valle d’Aosta. It is such a marvelous and special place. I have been skiing there a number of times (Monte Cervino, Monte Bianco, La Thuile) in my years in Italy and each time came back with a renewed respect for the mountains, the land and the wines. I have not spent much time there during the summer but I am sure the hiking rivals the skiing.

Each year they have an exposition for their wines in September. The association is called the Associazione Viticulteurs Encaveurs. In Italian, the term “viticultura eroica” means that those harvesting the wines are basically “heros” because it is so difficult in terms of the slope of the terraces.

In terms of wine production, there are a number of cooperatives as well as many individual producers. I also learned that some 40% of the members of the cooperatives are women, a fact I found quite interesting.

I spent a long time with a sommelier from the Valle d’Aosta at VInitaly one year. He was so incredibly well prepared and knowledgeable that I felt I had taken a trip through the region and through the vineyards with him. In fact, I highly suggest going to the sommelier booths at Vinitaly in years to come. You learn a lot and can taste many wines. I went on the last day of the fair at 900 AM and was alone with him for about one hour. I realize not everyone has that luxury. I felt very lucky that I did. It was one of my favorite tastings at the fair and among the most instructive.

For now, just an invitation and a suggestion – visit the Valle d’Aosta on your next holiday, winter or summer and I don’t think you’ll be disappointed.