I was lucky enough to go on a press trip to the Douro Valley a couple of weeks ago> I learned many things about Portugal and the Douro in particular and tasted some great wines. We visited 15 wineries that are part of a group called Soul Wines. We tasted both Ports and Douro wines made from indigenous and international varieties. Our first stop was to a cooperative called Cavas Santa Marta. Once upon a time the Douro was filled with cooperatives but no more. This particular cooperative was one of the largest and is a merger of more than one cooperative. The operations were enormous and very interesting. Additionally they had a number of women working in the laboratory which I thought was very cool. As I mentioned in an earlier post, I met many women in the industry which surprised me.

Cavas Santa Marta made an wide variety of wines, many for supermarket chains but not all. This tawny port shown in the photo was nice. I learned when in Portugal that tawny is really considered the true port by the Portuguese themselves and that the English created interest in Ruby. Lately everyone also seems to be making rose ports but they weren’t really for my palate.

They had huge barrels where ports were aged as one might imagine as well as a museum of objects used previously in the industry. 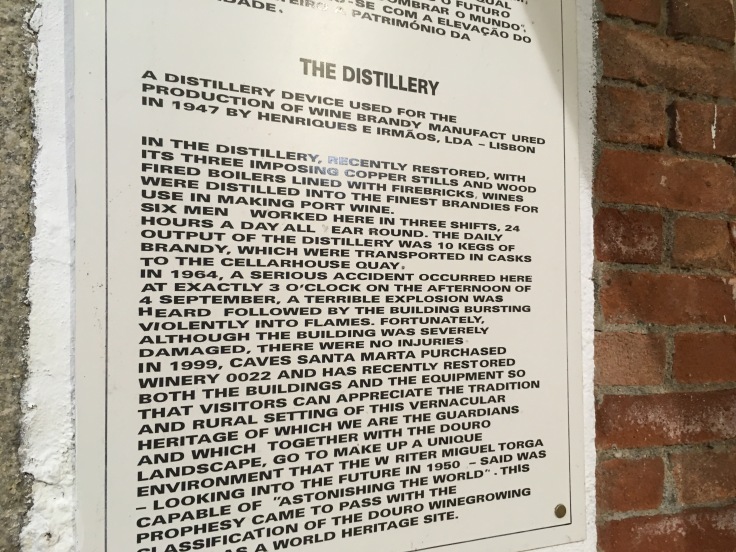 We also saw growers bringing in their grapes and having the sugars tested while still inside the truck.

What was hard to understand at first was why wouldn’t they want to have more sugar in their grapes if they are paid by the sugar content. I was told that it’s actually a formula that is a balance between the sugar level in the grapes and the weight of the grapes. They want the grapes to come in at around 13.5%. Clearly as the sugars increase the grape shrivels and the weight is lessened so it makes sense that growers will try to bring in the grapes at the level required. The operations were both old fashioned and modern at the same time. I found the whole thing really interesting and was happy to have had the experience as part of the tour.

I find that people tend to dismiss coops but that it is a huge part of any local market and important to understand.

One thought on “Wine of the Week: Tawny Port from Cavas Santa Marta”