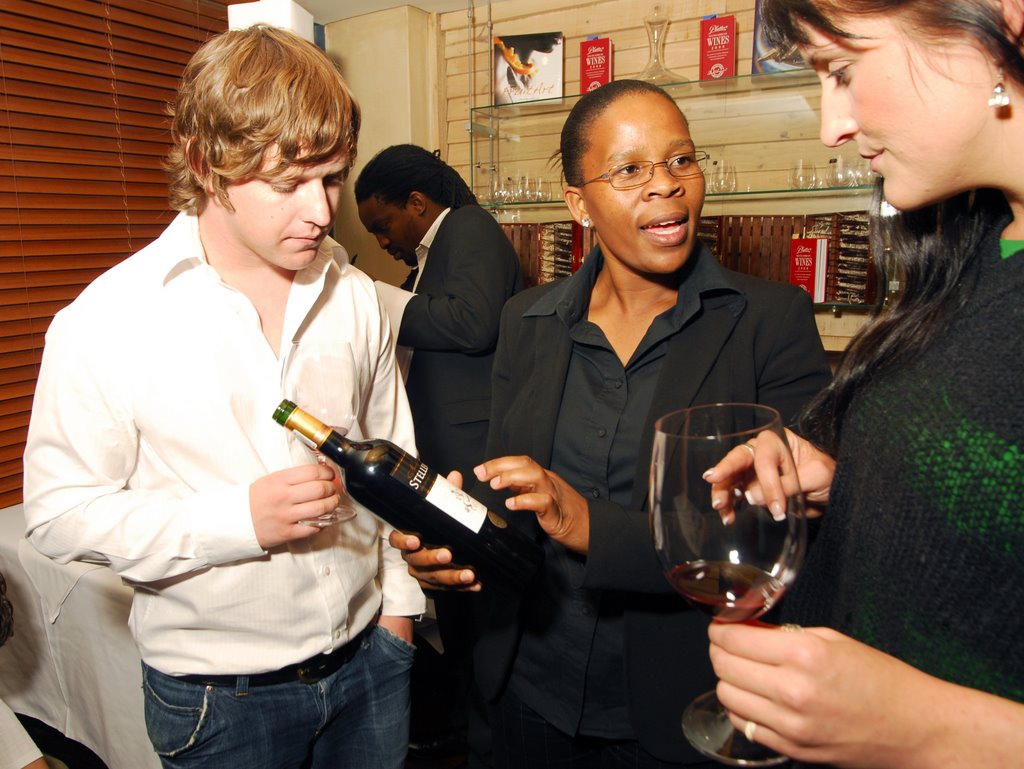 I met Ntsiki Biyela, a 30 something South African winemaker who was born and raised in Kwa-Zulu Natal, about a month ago during her visit to promote Stellekaya’s wines in the United States. Ntsiki is one of only two or three black female winemakers in South Africa but that isn’t the only reason that she’s so remarkably interesting. It’s because she’s a young, dynamic, great winemaker. She’s also a very talented communicator and actually convinced me to take a second look at Pinotage, a grape that I have never been partial to, to be quite frank. I spent many hours chatting with Ntsiki over the course of an afternoon and during a dinner that was organized at Braai, a South African restaurant owned by the same people that run Xai Xai, the well known South African wine bar. 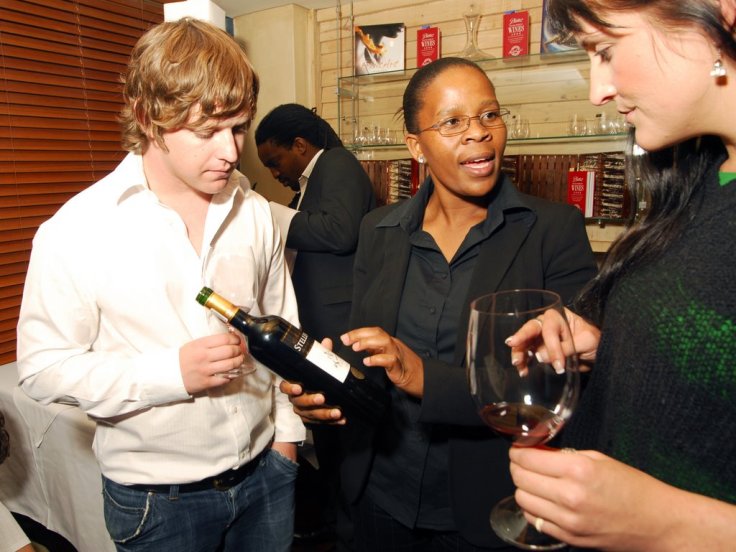 Ntsiki joined Stellekaya in 2004 and was at first assisted by Peet Le Roux. She’s been making the wines on her own since 2005 and works at times with consultant Michael Carmichael Green. Her 2004 Cape Cross won a Gold medal at the Michelangelo Awards. It was the first gold medal won by a black winemaker in South Africa and it was her first vintage.

Stellakaya is owned by Dave Lello and his wife Jane. Stellekaya, located in Stellenbosch, came out with its first vintage in 1999. Stellekaya means home of the stars, a combination of the Italian word for stars, Stella and Kaya, an African word for skies. That’s how Dave sees his winery, an African winery that makes wines in the European tradition. Stellekaya currently makes about 10,000 cases a year from these noble grape varieties: Cabernet Sauvignon, Merlot, Cabernet Franc, Shiraz, Pinotage and Sangiovese. 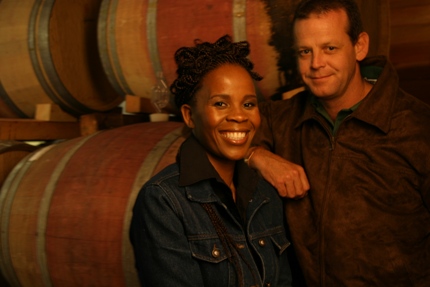 The Cape Cross which is Ntsiki’s favorite is a blend of Cabernet Sauvignon and Merlot with a small percentage of Pinotage. She made me a convert as well. She called Pinotage a spoiled child that wants to grab all the attention. That is if you let it. The trick, she noted, was to keep it under control and not allow it to dominate the blends. Ntsiki looks for balance and integrity in all of her wines and it seemed to me she was right on target with the Cape Cross and other wines.

Both Dave and Ntsiki spoke about how Pinotage is misunderstood in the United States because we have only gotten poor examples that have green bell pepper notes. Pinotage, they said, needs to be trained on a trellis and not grown on a bush vine the way many producers grow it. Stellekaya also allows its’ grapes time to cool after harvest and then lets them go through a cold maceration for 3 to 4 days. The grapes go into open fermenters and the cap is punched down in a traditional method. Stellekaya uses a wooden basket press and matures its’ wines in French oak barriques. Most of the wines are matured for 12 to 22 months in barriques and then spend an extra few months in the bottle before being released into the market. 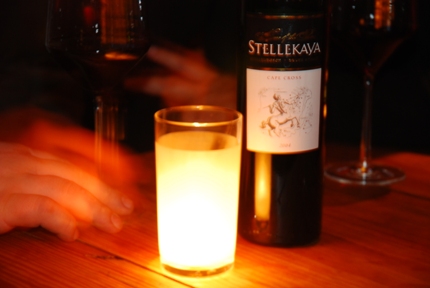 Ntsiki also makes two other blends in the Fusion collection, one with a touch of Sangiovese and the other with a percentage of Cabernet Franc. The Sangiovese blend is an homage to Dave’s love for Italy where he proposed to his wife. Ntsiki said she was still discovering the potential of Sangiovese. She was quite surprised she noted at how deeply colored her 2009 vintage of Sangiovese has turned out. This wine, called Hercules 2006, spent 10 months in French oak. It was somewhat different than other similar blends I have had with Sangiovese, Cabernet Sauvignon and Merlot. It was deeper and richer with chewy tannins but still a hint of Sangiovese’s acidity came through. I am sure that I would not have been able to place the wine in a blind tasting.

My favorite wine of the three was the Orion 2005 made from a blend of Cabernet Sauvignon, Merlot and Cabernet Franc. I am very partial to Cabernet Franc in general and Ntsiki’s treatment of it was exquisite. This wine truly impressed me and had me asking for many more glasses despite its high alcohol level, 15%. Perhaps it was because it was so amazingly well balanced but I didn’t get the kind of heat I usually do in a wine of that level. It was beautiful with layers of flavors and nuanced aromas of tobacco, chocolate, cedar, herbs and spices. Ntsiki said she had been looking to make a wine like Orion, “one that is full and big but that is accessible. One that speaks to you and gives you everything, all the character, balance and integrity that you could want.” I also tried their mono-varietal wines made from Cabernet Sauvignon and Merlot, both were good but I found the Merlot to be more my style. An easy drinking wine, it went very well with the food served at Braai.

In addition to discussing Ntsiki’s wines, we spoke a bit about what it was like to be one of the only black female winemakers in the country. “I was recruited to study at Stellenbosch and was given a scholarship by South African airlines. I moved 1000 miles away from home, from my grandmother who raised me as if I was her daughter and from everything I knew,” Ntsiki said. “I have been in Stellenbosch for 10 years now, 6 years with Stellekaya but Natal will always be home to me. There have been many changes in Stellenbosch over the last years. Many more black people now attend the University. There were five black women in my class but only two of us are now winemakers.”

Despite being a bit of her element, Zululand only got electricity in 2004, when she first came to Stellenbosch, Ntsiki said it has thus far been a great journey. “Stellenbosch is a great place to make wine. There are no problems with the climate. Sometimes you get a heat wave but not that often. We also have great soils,” she added.

I didn’t get to taste it but Ntsiki also makes a Shiraz. “It’s not at all like your typical Shiraz. Yes it’s big and peppery but it is also smooth and elegant with beautiful colors. Ntsiki has a long history with fermenting juice and used to make her tribal drink in Zululand, stirring a pot for many hours at a time when she was growing up. The drink she was making was a traditional beer made from corn and sorghum. Ntsiki who lost her beloved Grandmother in recent years told me a funny story that underscored just how extraordinary her choices have been.

While fermented drinks are part of the tradition in South Africa as is beer, some areas such as Zululand are not awash in wine. When Ntsiki’s grandmother first tasted her wine apparently she didn’t say anything but the second time she laughed and said that’s much better. “She always encouraged me to be the best I could be. If I am strong today, it is because of her,” Ntsiki said. “Dave is a great boss. He doesn’t micromanage me which is very important and it makes me want to do even better,” Ntsiki added.

Last year, Ntsiki was named Women Winemaker of the Year. “I feel blessed and I think this is going to be a great year,” she added. Ntsiki said that 2009 was a great harvest despite a heat wave and that she had high hopes for the vintage.

11 thoughts on “Women in Wine: A Chat With Stellekaya’s Ntsiki Biyela”