The Muffaletta – One of Italy’s Gifts to New Orleans 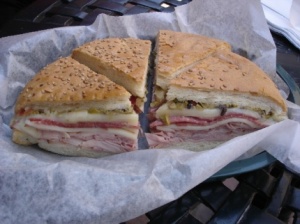 The Muffaletta is a delicious slice of Italy that is an integral part of the Crescent City’s food traditions.

Local lore is that the Muffaletta was created at the Italian run Central Grocery on Decatur St in the French Quarter in 1906. The store still sells Muffalettas and many say they are the best in town. The sandwich as you can see is huge and has a variety of cold cuts and cheeses topped with olive salad. While not slimming, it is an incredibly satisfying meal. Sharing is the way to go with this gigantic treat. For a great Muffaletta recipe, check out http://www.gumbopages.com. I had my Muffaletta at Cafe Beignet, a nice outdoor location on Bourbon Street in Muscial Legends Park. 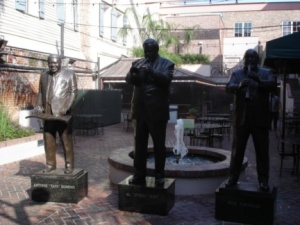 Not having had the original, I can only attest to the merits of the Muffaletta from Cafe Beignet but next time I am in New Orleans, I intend to do some comparison shopping. I had water with my Muffaletta but had I had the opportunity, I think I might have opted for a glass of wine. I am on a Chardonnay kick this month, having had too few to adequately pass blind tasting exams. One that I had during my stay in New Orleans was the Willamette Valley 2006 Chardonnay from Waterbrook. It had nice fresh fruit notes (apricots and nectarines stood out), some foral hints, a touch of minerality and the rich buttery, vanilla, nutty aromas that result from aging in American oak. It appealed to me and would have gone well with a Muffaletta without overpowering it.

A little history of Italians in New Orleans

Scores of Italians began moving to New Orleans in the late 1880s, mostly from Sicily. Often they worked in the food trade. They contributed to the city in a huge variety of ways and their history is celebrated in a local museum. Among the lasting achievements is a yearly celebration of St. Joseph. Sadly, the history of Italians in New Orleans is also rife with examples of prejudice and a terrible event that happened in 1891, the lynching of 11 Italians. I had no idea about this sad episode in American life before doing some research. To be honest, I also had never heard of a muffaletta. I don’t think I will be forgetting either in the near term.

For more information on Italians in New Orleans, go to the Museum’s website at http://www.airf.org.

Join me for Episode 6 of my #PandemicPivot series on Friday, April 23 at 12:00 pm EST as I speak with singer/songwriter @gregsteinfeld about his music, what he’s been doing during the pandemic in terms of performing and how the music industry in #nashville has come together during this hard year. #music #musicianslife #musician #performingarts #pandemicpivot #singersongwriter #lyrics #gregsteinfeld #vignetocomms
#happyearthday🌎 Let’s all do our part to promote our sacred planet today and everyday. Lots of little and big people are depending on us today and in the future. #protectmotherearth #nature
Great panel with amazing #womenfarmers hosted by @lesdamesny for #earthmonth. @riseandrootfarm is currently speaking about #food and #socialjustice and changes that happened during the #pandemic. #womensupportingwomen #foodforall.
Join me on Wednesday, April 21st at 11:30am EST/17:30 CET as I host my weekly #winechat. This week I will be speaking with Tali Dalbaha @talidalbaha about her #winejiourney and her company Wines du Monde. #womensupportingwomen #womeninwine #wineinstagram #wineinsta #wineoclock🍷 #vignetocomms #womensentrepreneurship #womeninwinebusiness #winelover
#malbecargentino #malbecworldday @kobrandwines @monteswines @bodeganorton A great way to celebrate this day with two beautiful expressions of this wonderful grape. Black fruit, spice, cedar notes, and forest floor together with silky tannins, make both of these wines great pairings with a grilled steak with chimichurri. Great reminders of how well this grape does in #argentina🇦🇷. #saturdaysips #celebrate #wineinsta #wineinstagram #argentineanwines #vignetocomms #malbecwine #malbec
A carpet of #magnolia leaves-my favorite trees with my special boy. #naturesbeauty #kids #spring #pinkflowers #pinkcarpet #momsofinstagram