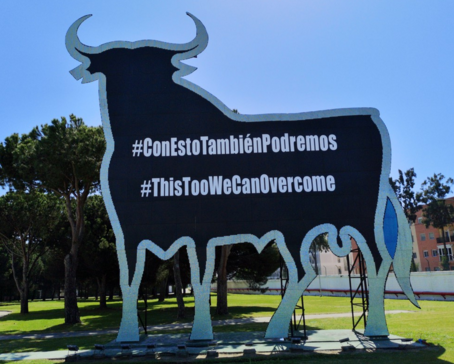 Weeks ago, after having attended a Zoom conversation about Sherry held by Bodegas Lustau, I promptly ordered three bottles of Sherry. Osborne is one of the oldest Sherry house, started by Thomas Obsorne Mann in 1772. He began bottling his own sherry in 1804. Some years later Osborne joined forces with the owner of Duff Gordon. By 1872, the Osborne family had bought out the other partners and by while the Duff Gordon brand continued until about 1980.

While Osborne still owns bodegas they have sold many of their hectares of vineyards. The company focuses not just on sherries but also on brandies, hams and other beverages as well as tourism and restaurants.

From the website, the company looks enormous now from it’s more humble origins. I love the Logo for Osborne which is of course the symbol you see throughout Spain. It’s great to see the Toro or Bull and think about traveling through Spain.

The Fino sherry is perfect with nuts and with the Wild Rice Mushroom Pilaf I am eating this evening. The Fino has great acidity, salinity, undertones of almonds and brine. Relatively inexpensive and available through most delivery services, this is a good Fino to keep at home and quite reasonable in terms of price, at under $15.

I appreciated their hashtag about the moment we are living in, #ThisTooWeCanOvercome. Salud!