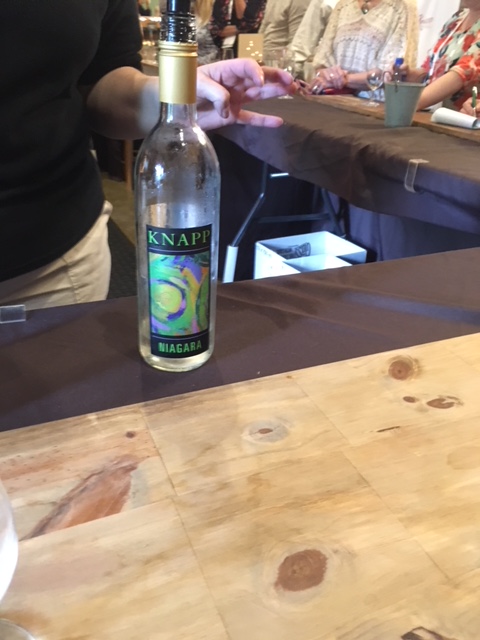 Today I was lucky enough to visit five wineries on Cayuga lake, one of the Finger Lakes in upstate New York. I’ve always shied away from tasting hybrid grapes and those made with the Vitis Labrusca vines but today I decided to throw those preconceived notions out the window and just taste what is grown locally. I found a number of wines that interested me among the many that we tasted.

The wine above was from Knapp. The winery has been active for 35 years. Apparently they are home to some of the oldest red varieties grown on the Cayuga Wine Trail.

I tried their Vignoles and their Niagara. The Niagara was very grapey and would be nice with a fruit dessert. According to the Speciality Produce website, “Niagara grapes, botanically classified as Vitis labrusca ‘Niagara,’ are an American heirloom variety that grows on woody, tendril-climbing vines that can reach up to twenty feet in length….These grapes are a cross between the well-known concord grape and the lesser-known cassady grape and are most widely recognized as the variety used in white grape juice.”

We tried Vidal Blanc at a number of the wineries such as Buttonwood. This was a very beautiful winery and clearly a venue for parties and weddings. They bought a lot of their fruit for years but under new ownership have planted grapes. Their Vidal was very sweet with 3% residual sugar. That said, I didn’t find it unctuous and I enjoyed it. I could see it paired with spicy Asian or Indian foods.

Vidal is a French hybrid, a cross between Ugni Blanc and Seibel, that was developed in the 1930’s by the French hybridizer, Jean Louis Vidal.

I tried Vidal at many of the wineries and liked it a lot. The first one from Swedish Hill winery was slightly more grapey and fruity than that at Buttonwood. I got a lot of peach, apricot and floral aromas and flavors. Swedish Hill was founded in 1986, one of the earlier wineries on Cayuga and part of a larger group that includes Goose Watch winery, another winery on our tour.

Another grape that we tasted often today was called Vignoles. We had one at Knapp and Varick winery, among others. Varick had an amazing country store where they sold all kinds of food products that were just delicious.

Vignoles as a grape was floral with citrus notes, considerable residual sugar and a long finish.

I tasted a number of other hybrid and native grapes and must say that I think it’s time to keep an open mind.

One thought on “Discovering New Grape Varieties in the Finger Lakes”