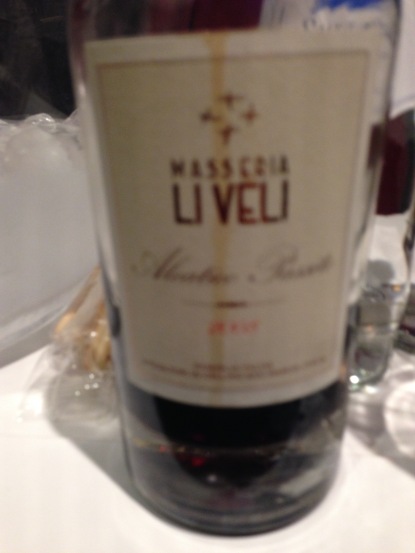 I know this picture is very blurry but in addition to having tried many wines that afternoon, I also had just seen Sting sing two of his songs in what felt like my living room so perhaps I was overcome with emotion.

All of this took place during the first day of my trip to Verona earlier this month. Sting decided to play a couple of pieces during the press conference and needless to say, I and everyone else there, was delighted. The last time I saw Sting was actually when he played in the Arena in Verona in the early 2000s. It was a real kick to see/hear him so close to me. Other than having Bruce play in front of me like that, I can think of few artists that I would rather listen to.

Getting back to the wine part of this post, the wine in the picture is an Aleatico from Puglia from Masseria Li Veli. Aleatico is also grown in Tuscany and in Lazio. I have had examples of this wine from both of those places as well.

The Aleatico grape is particularly aromatic. It produces rich, profound wines with dried fruit, plum and fig aromas and flavors. The Italians would call this a “vino da meditazione.” It also had that Mediterranean note that is often called “garrigue” and is a combination of herbs and spices that one finds in the hills there.

Apparently the vineyards where the grapes are grown are a mixture of clay, calcareous rocks. The grapes are picked by hand and then laid to dry in baskets in a controlled and ventilated room for 45 days. Once the drying process is completed, the grapes are destemmed and put into 500 liter casks where fermentation takes place. The wine is then aged for a minimum of 42 months in 112 liter oak barrels. Before bottling it is put into a steel vat to let the sediment settle to the bottom.

This wine was absolutely striking and delicious on its own as it would be with a dessert on the drier side such as a ciambella (a dry donut-like cake).