As I mentioned yesterday, I am going to be writing about wines from Lombardy all week. One friend was perplexed that I said I didn’t know the wines of Lombardy that well. What I meant and was perhaps misunderstood is that I don’t know all of the wines of Lombardy as well as I might like to, although some I know quite well and have worked with in the past, visited the regions or am currently working with as we speak. 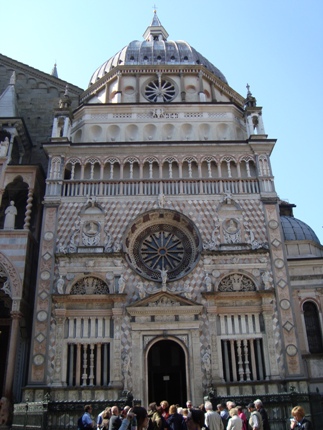 Today I want to mention an area of Lombardy that I love, Bergamo and its wines from the Valcalepio, still quite unknown in the US but also in many parts of Italy. The Consorzio Tutela Valcalepio was founded in 1977 by 22 members. Today, the consortium has 85 members, or about 98% of the producers of Valcalepio. The area is in the province of Bergamo and has two main wines that are allowed to have the DOC denomination. The Valcalepio Rosso DOC is made from Cabernet Sauvignon (25%-60%) and Merlot. The grapes are harvested and fermented separately. The wine is then blended and aged. If aged for three years, at least one in wood, it can be called a Riserva. Of the 400 hectares that go into making wines in the Valcalepio area, 70% are used for the Valcalepio Rosso.

The Valcalepio Bianco DOC is made from Pinot Bianco and Chardonnay (55% to 80%) and Pinot Grigio (20% to 45%). In addition to the DOC wines, a line of IGT wines are also made including a traditional method sparkling wine.

No post on Bergamo and the Valcalepio can be complete without mentioning the Cantina Sociale Bergamasca. They produce wines using the Terre del Colleoni or Colleoni DOC denominations, a DOC created in 2011. This cooperative was founded in 1957 in San Paolo d’Argon. It has 150 members and 160 hectares of vines. The coop produces some 800,000 bottles annually and exports currently 10% of its production.

I did a project with the Cantina a number of years ago and have always had a fondness for their wines.

Valcalepio is an area that runs from the Lago d’Iseo to not far from Lago di Como, about 60 kilometers. These are the prealps and can be separated into two parts, one with clay and calcareous soils and the other more driven by schist. The vines grow on hills of 300-600 meters above sea level.

Bergamo is a jewel of a city and anyone visiting the Expo 2015 should take a day or a few hours and visit Bergamo. My first dinner outside of Milan when I moved North in 1995 from Florence and Bologna was in Bergamo at a restaurant called Trattoria da Ornella. It was the first time I had Polenta Taragna, a typical dish from the Valtellina, another area of Lombardy. It was very picturesque with high ceilings and I ate more meat than I had ever seen in an Italian restaurant. That was my first experience in the lovely city of Bergamo. Over the years I have had many more thanks to good friends who live there. Bergamo also boasts fantastic churches with a number of beautiful paintings by Lorenzo Lotto, a painter that I am a fan of from the 1500s

One thought on “Wines of Lombardy: Valcalepio – Bergamo”