Wine and Shakespeare in the Hudson Valley

I discovered the Hudson Valley and its wines when I first moved back to the States after having lived in Italy for many years. I was excited to have a wine region so close by but at the time I was a wine snob and only wanted to drink Old World Wines. Many wine classes later and having had the opportunity to try much New World Wine, I now have a more muted idea of the old vs. new debate. My first trip in 2006 to the Warwick Valley Winery was to partake in celebration of Bob Dylan’s birthday. The winery has a nice apple orchard in which you can sit, sip wine, have a picnic and listen to music or see a play. The Dylan fest is a yearly occasion as are tributes to Johnny Cash and the Grateful Dead, both slated for later this summer. This past weekend, I went on a great hike and wine tasting outing with Outdoor Bound, a New York based adventure travel group. 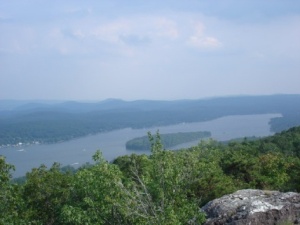 After a long hike we went to the winery to try some wines and watch a performance of Shakespeare’s Twelfth Night.The play was very well done and lighthearted, just what I needed after scrambling up a couple of steep boulders. This view of Greenwood Lake was a real treat. Who knew New Jersey was so pretty?

The Hudson Valley together with the Finger Lakes and Long Island are New York’s premier wine growing regions. Famed author and wine blogger Dr. Vino mentioned an interesting conference where wines from Long Island will be compared with other maritime wines in his Daily Dose yesterday. The upcoming conference will be held on August 5 & 6 at SUNY Stony Brook in Southampton. The discussion will revolve around the main theme of Cool Climate/Martime Wines in a Global Context.

My favorite wine at Warwick is their Cabernet Franc, a grape I particularly like. This one had lots of black fruit, a bit of oak and some herbaceous notes. It called out for food and lucky enough, plenty was on hand. The winery is very well known for their ciders and brandies/liquors. I didn’t try any but the cider appeared to be a hit with the hiking crowd. Warwick also makes a series of wines using indigenous American grapes and American-French hybrids such as Baco Noir, Cayuga and Vidal. While I have moved along on the Old vs. New World debate, I am still pretty stuck on vinifera grapes. Maybe that will change in time too…who knows.