I discovered the wines from Pitigliano in the Maremma in the early 1990s when I was lucky enough to visit the town during a weekend trip. I was on the trail of the Etruscans, an ancient people that populated these towns a few thousand years earlier. My Mom studied the Etruscans in graduate school when pregnant with me and their history has always interested me.

The town is so beautiful with tufo caves and amazing views. It’s near two other towns which I loved Sorano and Sovana. I’ve never visited the area again despite many years in Italy and numerous trips to Tuscany. I was therefore thrilled during the Anteprime in February to have the chance to taste a number wines made in the area. Pitigliano is famous not only for its beauty but also for a little known fact that they make a lot of Italy’s kosher wines, among other things.

The soils in the area are of volcanic origin and vineyards tend to be about 300 meters above sea level. The climate is Mediterranean. Bianco di Pitigliano was given a DOC designation in 1966.

There is a large cooperative there called Cantina di Pitigliano. It was founded in 1954. They have 600 members. I tried a number of the wines that they make, including Gli Archi, Ildebrando and the Nel Tufo Vermentino. The Bianco di Pitigliano from Gli Archi was made from Trebbiano Toscano, Malvasia, Chardonnay and Sauvignon as was the Ildebrando. Nel Tufo was 100% Vermentino. I though they were all interesting and would be lovely aperitif wines. The had a mineral, maritime note that I like and the bitter almond finish I associate with Italian white wines.

I also tried a wine from the Azienda Vitivinicola Villa Corano di Stefano Formiconi called Cor Unum Bianco. This Bianco di Pitigliano DOC superiore was made from  Malvasia Toscana, Verdello, Ansonica and Grechetto.  I loved it and wrote in my notes that it was rich and beautiful. 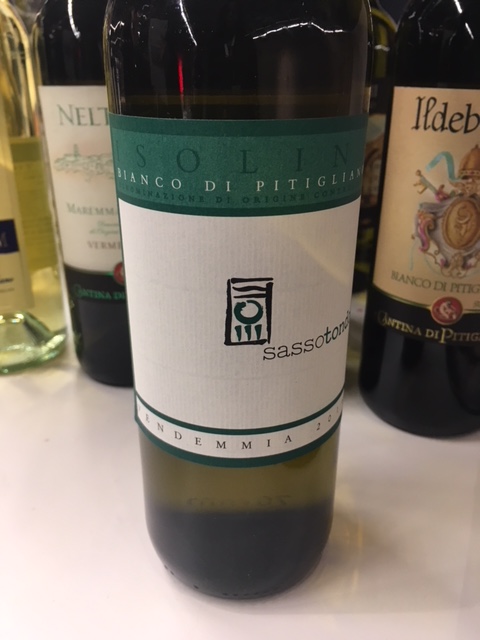 The third producer whose wines I tried was Azienda Agricola Sassotondo di Benini Carla.  The wine was called Isolina, also a Bianco di Pitigliano DOC Superiore and was a blend of Trebbiano, Sauvignon and Greco. It had beautiful white fruit, hints of sweetness, marine notes and sapidity.

The Cantina di Pitigliano has been making Kosher wines , under the label, La Piccola Gerusalemme, for more than 20 years. Rabbis from the Jewish communities in Livorno and Rome oversee  all the phases of winemaking from the pressing of the grapes through to bottling. They make a red and a white wine which they sell in Italy but also export. There is an association with the name La Piccola Gerusalemme that has various links to Jewish life in the area and its history.

Pitigliano, has been home to Jews since the 1400s when they were sent away from Rome by the Popes. They found refuge in this small hill town where they were able to live their lives. A model of tolerance for many generations, Jews from all over Tuscany began to move to Pitigliano and they founded a temple there. Under the Orsini family, Jews managed well but the Grand Duchy of Tuscany and the Medicis were less enlightened towards the Jews and at one time it confined them to a Ghetto.  Few people are left of the community but those that are try to keep the history alive.

I look forward to visiting the area again, one of the most beautiful in Tuscany which as we know, is saying something since the whole region is such a gem.

Here is a lovely article about the town from the New York Times some years ago. A good story for Passover.