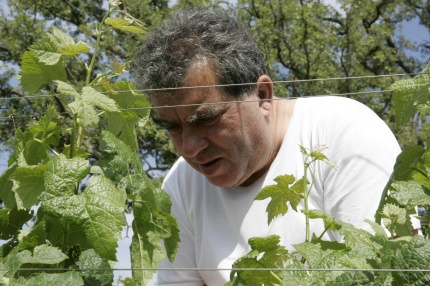 I just got back from Montalcino this week and am reminded about so many special people I have met from that area. Among them of course was Gianni Brunelli. I met Gianni and his wife Laura Vacca through their New York importer Dancing Bear Cellars at Vinitaly 2007. I stayed with them that summer and have since developed a friendship with Laura. I just saw Laura this weekend and she looked wonderful but I can imagine these years have not been easy for her. I have immense admiration for her and the work that the two of them did together for 31 years and that she has carried on these years since his passing.

Gianni Brunelli, one of those larger than life figures, he was a friend to artists, writers, musicians and Ambassadors, Brunelli shared his table with them all. His customers included the late Italian poet and writer Mario Luzi who once wrote an ode to his Sienese restaurant Osterie Le Logge. Gianni, Laura and Gianni’s mother founded the restaurant in 1977. It is located just off the central piazza in Siena, Italy where the Palio race has been held for centuries. When I dined there with them at the restaurant, a parade of musicians, politicians and bank directors made their way past our table. Gianni said hello to everyone. So much so, he almost seemed to be the local mayor. In fact, an American couple leaned over to ask who he was and why everyone kept stopping to say hello. In addition to his restaurant, Brunelli used to own a café in Siena with the world renowned artist Sandro Chia, right in the Piazza del Campo, the main square in Siena. Chia created a gorgeous mosaic in the bar which can still be seen. Chia went on to create his murals all over the world including the famous one in the restaurant Palio in New York City. While Brunelli’s restaurant is world famous, his wines are legendary. They are hard to attain and having one is considered a privilege. Gianni, though, was very down to earth. He had a shock of white hair and looked like an amused genius. His half smile was both charming and disarming at the same time. He had bear paw-like fingers and a warm touch. That warmth was transmitted in every encounter with Brunelli. Gianni Brunelli produces just 30,000 bottles of wine a year, a mix of Brunello Riserva, Brunello, Rosso di Montalcino and Amor Costante. Drinking Brunelli wines is an incredibly memorable experience. They are concentrated, layered and nuanced at the same time. A native son of Montalcino, Gianni was attached to his town, his country and his land. He believed in organic viticulture and planted all of his vines and every cypress tree on his property.

Brunelli’s dedication was total. He was always toiling away in his vineyard or tirelessly working in the restaurant. Gianni put in long hours to make sure each detail was just perfect. Laura was always at his side in all of his endeavors – a true amor costante. The spirit of this son of Montalcino and Siena lives on and was evident in the new 2013 vintage which was a lovely, elegant Brunello. I wish I had had more time to spend with Laura but was happy just to see her smiling face.