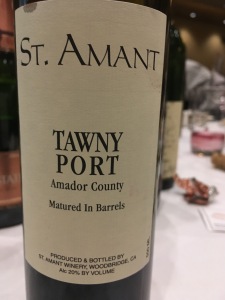 I had never heard of Lodi, CA before I went to a Society of Wine Educators conference some years ago in California. Or at least I wasn’t aware of it. Infact, I’m pretty sure my first home winemaking exploit was done with grapes that also came from Lodi. In any event, I discovered Lodi at one of the seminars I think in 2008. I had no idea however how vast and varied the grapes grown in Lodi were.

This year, I attended the American Wine Society conference for the second time. At their gala dinner, I was lucky enough to be invited to sit at Tony Lawrence’s table. I met Tony last year on a press trip to the Douro Valley. It was a small trip and we spent eight days together so we got to know each other pretty well. Tony is an amazing, eclectic, funny guy. I had no idea what a spread he would have at his table. The gala dinner was already over the top but the wines we drank at our table were really something special. Tony even brought us special glasses.

One of these wines is the one I want to mention today, the St Amant Tawny Port from Lodi. Stuart Spencer who made the wine was sitting next to me at dinner and while he is pretty close to the vest in his affect, I could tell this wine was close to his heart. It was fantastic with layers of rich flavors and aromas. Much like the tawny ports I had tasted in the home country.

I discovered reading his website that his parents bought the family farm in in 1970. Apparently his father also had a wine shop and that is how he discovered Port. While others were planting Cabernet, his father planted the Portuguese varieties Touriga, Tinta Cao, Alvarelhao, Souzao, and Bastardo in their Amador County. First vintage of the grapes was in 1981. The history of the vineyards is long and complex, much like this wine. Their philosophy of winemaking is much like mine would be if I owned a vineyard.

The website notes that their “latest batch of Tawny Port is similar to our first Tawny bottled back in 2000. It’s a blend of three barrels from 2001, 2006, and 2007. The wine is aged untouched for the past 10 years developing a deep amber hue with stunning aromas that leap out of the glass and fill the room.” I found fig, honey, caramel, cocoa, cedar and wonderful forest notes. I thought it was great and told Stuart so. I never thought I would be waxing poetic about a Tawny Port from Lodi but sometimes, wines can surprise you. I know this one did.