Moldova – An Ancient Country with Beautiful Wines to Discover

This month #WinePW travels to Moldova.

Where is Moldova you might ask when reading one of these posts. It is in Eastern Europe, in the South East specifically and borders Ukraine and Romania. The Black Sea basin is said to be the natural home of the grape vine.

It’s climate is moderately continental thanks to it’s proximity to the Black Sea and the many rivers and streams that criss cross the country. With a varied landscape, there are three principal historic regions known for wine:  Valul lui Traian (south west), Stefan Voda (south east) and Codru (center).

I love this breakdown of the grape varieties according to location. I have never seen the Caucasian category before. Very exciting to me.

The title of my post is Moldova, An Ancient Country because although I and many others aren’t that familiar with the Wines of Moldova, they have been around for a very long time. According to the Wines of Moldova website, The history of Wine of Moldova starts in 3000 BC, while the first vines were recorded here 7000 years BC. Wine used to be utilized as a medium of exchange and a trophy awarded after fights, which has made the wine a national product of Moldova.”

Moldovan wine history is long and varied and explained in great detail on the website suffice it to say, Roman occupied Moldova, the Ottoman Empire ruled Moldova, the Soviet Union ruled Moldova and throughout all of these occupations and difficulties not only were the wines prized but they made their way to the most noble families to put on their dinner table.

During the Soviet Union, 50% of the wines drunk were made in Moldova. A hefty amount. While an ancient country, it is also a new one and the modern wine industry dates to the 1990s.

Jeff of Foodwineclick!, our host for this weekend’s #winePW group, has visited and written extensively on the region. Click here to read his complete post about his visit.

While Jeff’s posts got me itching to go, I am content for the moment with the lovely samples I received for the blogging extravaganza – a Pinot Grigio, a Blanc de Noir and a Rara Neagra wine from an indigenous variety. Already thrilled at trying a new variety for me – Rara Neagra- I was really surprised by the quality of all three wines.

The first wine I tried was this Pinot Grigio from Purcari. The village of Purcari is home both to this winery and to the Agon Zograf Monastery.  This area was of great interest to French wine merchants who found similarities between the soils here and in Bordeaux.The wines were considered very prestigious and at one point were as well known as their French counterparts in Czarist Russia. They graced the table of Emperor Nicholas II as well as King George V and Queen Victoria of Great Britain.  Fast forward a couple of centuries and today Purcari has replanted many acres of vineyards and exports in more than 25 countries.

My first instinct when I tried the wine was to assume I got a bottle of Chardonnay. I didn’t read the label and I was looking for Apple in my glass and a touch of wood. I found neither. When I looked at the label I laughed and realized that this Pinot Grigio was a nice addition to my Pinot Grigio examples. It was lemon in color with citrus notes and a green tin undertone. On a blind tasting I would have been hard pressed to say this was a Pinot Grigio. It came alive with the Asparagus Frittata I made for Brunch. It was broader than some Pinot Grigio I have had in my life which is why I thought at first it was a Chardonnay but it had none of the over oaked flavors I was expected. Lovely and  subtle it was great with the Frittata.

Next Up was the Cricova sparkling wine which I was very excited to receive. I love sparkling wine for everyday drinking throughout a meal. This one was a Blanc de Noir and was a Pinot Noir. The history of this winery and its national collection has a lot to think about but I will leave that for another writer. I found this exhaustive post about the wine cellar from Forbes. A good read by Jim Dobson. What I can say is that I liked the traditional method wine they sent to me which was a perfect match for both grilled Salmon and Spaghetti with Bottarga. The cellars are I believe the largest in the world. They are exactly what I would imagine a former Soviet territory to have. I didn’t expect them to have a Nazi’s wine collection which honestly left me a bit speechless.

The wine was very straightforward on the nose and palate. I got more berry fruit than mushroom notes but the creamy perlage and the lovely acidity worked well both with the Salmon and the salty Bottarga. I also was celebrating good news that I had received and was very happy to have a spot of bubbly on hand. 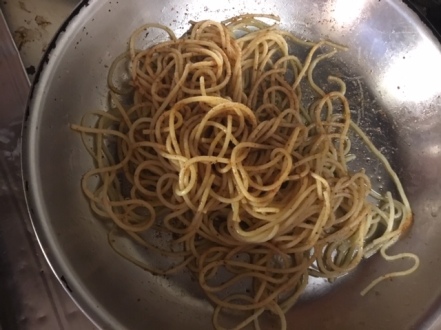 My third wine was from the Gitana Winery, owned by the Dulgher family. This one was made of Rara Neagra. At first I thought it was the Moldovan way of saying a grape I know and then I discovered that it is indigenous to Moldova. Nothing I like better than local grapes, so I was really excited about this one too. The winery is located in Valul lui Traian, one of the three historic areas of Moldova for winemaking.

The grape is an ancient one that is grown in both Moldova and Romania.  Ruby red in color in the glass it had aromas and flavors of jam, plum and stewed fruits. Velvety and round, the tannins were silky and the acidity was  relatively high. The wine seemed to have lots of sweetness either from the wood used or RS. I paired it with a pizza and it was delicious and one glass easily led to the next. Perfect on this rainy Friday. 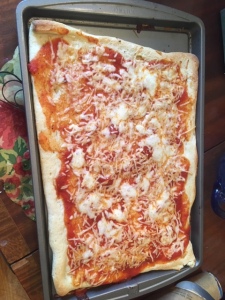 I have so enjoyed trying these wines and learning about Moldova and its long history. I look forward to reading what my fellow #WinePW folks have to say and to the chat tomorrow, Saturday, June 11, 2020 at 11am EDT.  Use #WinePW to find us.