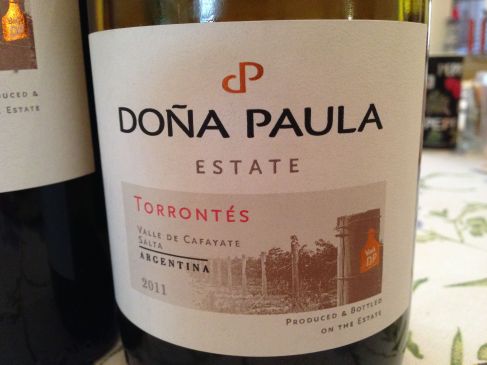 I was thrilled to get a note from Snooth asking if I wanted to participate in a virtual tasting of the wines of Dona Paula. The virtual tasting series is wonderful and informative. Unfortunately I missed the event because work got in the way – imagine that but I did taste the wines on my own and really enjoyed them.

Full disclosure, I have visited Dona Paula in Argentina so I was already well disposed to try the wines. My visit in 2007 was part of a longer visit to Argentina, although not long enough.

This time around the setting was different, I was at home eating grilled salmon and tasting the Torrontes 2011 on a Sunday in November. I was very pleasantly surprised. Surprised because the Torrontes had a lot of intensity and structure. I don’t drink Torrontes that often and I had forgotten how a beautifully made one can be – floral and fruity, structured with clean acidity. Torrontes in general hails from the North of Argentina, specifically Salta in the Cafayate Valley. It is grown at 1700 meters above sea level. Soils are said to be rocky and sandy. According to their website, the “grapes are gently destemmed while SO2 is added to avoid oxidation. The juice is separated from the skins, without pressing, and fermented in small concrete tanks at low temperatures.” I also find it very interesting that this wine is made from three different harvests, meaning they pick some parcels of these grapes in February, others in March and a third time in April. The lots are then blended I assume although this wasn’t spelled out on the website. I really enjoyed this wine which unbelievably is only $12-15 in a host of stores.. Click here . 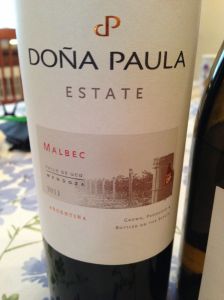 I also tasted the Malbec Estate 2011 which is made from grapes that grow in Tupungato, Uco Valley and in Altamira, Uco Valley. The vineyards in these locations are also at a high altitude, 1,350 meters and 1,150 meters, respectively. For a Malbec, I did find surprising minerality which I assume is because of this altitude. Yes it was soft and plushy as many Malbecs are but it was also nicely balanced which I find many Malbecs are not. For $13-$15 this wine was also a great value. Both are perfect wines to bring to a holiday party and will be crowd favorites.

Earlier this year, I attended a press conference where Ambassador José Luis Pérez-Gabilondo, the Consul General of Argentina in New York, said that Argentina was, for the second consecutive year, the 4th largest exporter of wines to the U.S., both in terms of volume (with more than 61 millions of liters) and in terms of value (with exports reaching $297 million).
Income from wine exports increased to $741 million in 2012 with Malbec a key contributor to this overall growth. Argentina has 1300 wineries and is the fifth largest producer of wine in the world. Argentina’s signature grape arrived in the country from Cahors in France in 1853 thanks to Michel Aime’ Pouget, an agronomist who was hired by the President to run the Quinta Agronomica de Mendoza.

Loved this #semillon from @happswinery in #westernaustralia #margaretriverregion. Wonderful pear, grass, hay and mango notes together with good acidity and a lovely waxy mouthfeel made this wine a great weekend treat.
This lovely wine has smoky, spice, cedar notes together with black and red fruits. Silky tannins, good acidity, and an enveloping mouthfeel make this a great wine for winter dishes. Leather, tar, and bramble came in a third wave of the wine which had a long finish. Elegant, complex, and persistent on the palate, this one is definitely one that could age another 3-5 years. The wine I tried was a 2015 and was wonderful today but has a way to go too. I decanted it which I almost never do and the additional air brought out so many wonderful notes in the wine it made me wonder why I don’t do it more often. #bandol @domainelasuffrene #frenchwines #frenchwinescholar #provence #winterwine
“The time is always right to do what is right.”
Did you know #brazil makes great #sparklingwine? Grapes can be #pinotnoir #chardonnay and #rieslingitalico blend, #moscatel, or #glera. I think you will be impressed. Great producers @familiasaltonwinery @grupomiolo @casavalduga @casaperini @pizzato @familiageisse @lidiocarraro @vinicolaaurora @coopvinicolagaribaldi and others. This one I bought at @totalwine. #bubblesallthetime
Today is a holiday in Italy where an unattractive old looking #woman gives out coal to children who are bad and candy to those who were good, the Feast of the Epiphany. Mostly though, the Befana signifies the end of the Winter holidays and after two weeks of vacation, everyone has to go back to work, even in Italy. I always suffer from what is called #sindromedarientro or the dreaded re-entry. Please don’t misunderstand, I love my jobs but still it is work to get back into the swing.
More bubbles to share. A wonderful #cremantdebourgogne made from #pinotnoir and #chardonnay.. The #vineyards are in the Auxerrois. Loads of minerality, salinity, and racy acidity in this sparkler. Apples and pears with white flowers, a hint of yeast and brioche, nutty smoke on the finish. Lively, fine bubbles with a frothy perlage, This nuanced wine was great with swordfish and Dijon mustard sauce. #cremant seems to be my go to wine from all 8 areas of #france where they can be made. Got this one at @astorwines @veuveambal. Apparently the company is the largest producer of #cremantdebourgogne. A family run company begun in 1898, they have over 100 years of experience with these wines. Moreover, it was founded in #rully by a #pioneeringwoman named Marie Ambal. Eric Piffaut and his son Aurélien now run the winery and are the sixth generation to do so. #sustainablefarming #stewardsoftheland, the family follows minimal intervention. With 250 hectares of vines in #burgundy over six different #terroirs, their wines expreas the complexity of this historic region. #frenchwinescholar #winewednesday