September is California Wine Month . It’s also harvest and wildfire season. These three factors and that our Wine Pairing Weekend bloggers are looking at the harvest through the lens of climate change and other environmental factors with Gwendolyn of Wine Predator as our host have led to today’s post. Gwendolyn’s invitation  for our event is  here.

Earlier this summer, thanks to Tina Morey of #winestudio, I attended a zoom chat about the Petite Sirah grape hosted by Jo Diaz and a number of producers from the advocacy group called PS I Love You .

Before I jump into the wines I tasted from Robert Biale vineyards and my pairing with BBQ foods, I want to say a few words about this grape.  It is a red grape that originated in France but made it’s way to California  and was “introduced into California by Charles McIver. He imported Petite Sirah for his Linda Vista Vineyard, at the Mission San Jose in Alameda County, entering the US through the East Bay.” according to the PS I Love You website.

Unveiled by Francois Durif, a botanist in France in 1880 as a new variety,  it is a crossing between Syrah and a grape called Peloursin. It is also called Durif in France, named for the man who discovered it. While planted in other countries such as Australia, California is really it’s best growing area. I wanted to write about what Petite Sirah is. When I read about it, people often describe what it’s not. I would hate if someone described me that way, so I am giving Petite Sirah it’s due. Positive attributes first and foremost I always say.

My first experiences with Petite Sirah were many years ago but I didn’t understand the grape. I had just moved home from Italy and my palate was very calibrated towards old world, specifically Italian wines. Over the years since I moved back, my palate has changed as my tastes have broadened so has my understanding of New World wine traditions although I confess I am not as well versed in California wines as I should be. I am going to perhaps remedy that this year with a course from David Glancy, MS, owner of the San Francisco Wine School and a friend. I may take the plunge and sign up for his certification class. I digress.

According to a Washington Post article, one winemaker Dave McIntyre quotes as saying that, he is experimenting with replanting “heritage varieties” that “once were popular in Northern California but were largely supplanted in recent decades by cabernet sauvignon and chardonnay as the market for those wines grew.” Petite Sirah is one of these “heritage varieties.”

Combating climate change will have to take many forms. Wineries are looking at many different ways of doing that and one winery that seemed to be at the forefront of it all is Robert Biale. They are well known both for their Petite Sirah vines and even more so for their Zinfandel. I love this picture of an old Zinfandel vine. 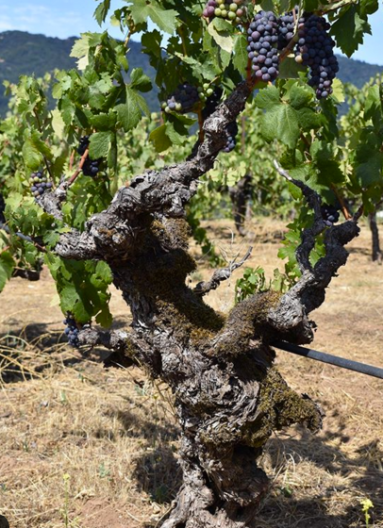 Biale has a great backstory and a huge connection to Italy which is always fun to discover and not surprising as so much of the California industry was created by Italian immigrants.

Aldo Biale lost his father at a young age and had to help  his mother on their farm. He sold produce to people in the Napa Valley and also some of the family’s   homemade Zinfandel. According to their website, “Over the old “party line” phone system, the code words “a Black Chicken” signified a jug of bootleg wine…and kept nosy neighbors and the authorities from finding out about Aldo’s underground Zinfandel operation!” They called it the Black Chicken in homage to the Chianti label for the Gallo Nero that they knew from Italy. Aldo went on to marry an Italian girl named Clementina from Piedmont/Liguria and the rest is history. 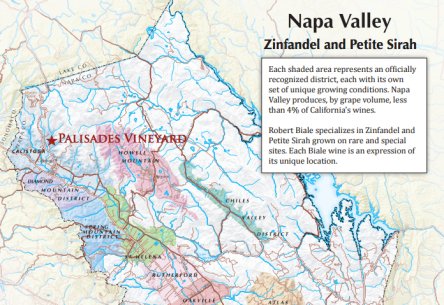 In addition to this Italian love story, they also have a typical modern Californian story where they own some of the vineyards and also seem to buy grapes from properties and people they work with over long periods of time.

One of the wines I tried was from a vineyard called Palisades. Owned by two different families over the course of the last 25 years, it is in the Northern part of Napa.

According to Biale’s team,  the 2020 is shaping up to be a great harvest with 65% of their fruit already picked by last week. They are one of only 43 wineries in Napa to receive Land and Winery Green certifications. The certifications take a number of years to obtain and focus on sustainability of the land, its stewardship of land and water resources, employees and community and business practices.

They also use bird houses “to provide habitat for owls and bluebirds that are predators for unwanted rodents and insects.” I love their glossary of farming terms on the website. It’s a refreshing to see that people don’t assume you know how they use language or what certain terms mean.

While I didn’t meet or speak with the  two owners, Robert Biale and Dave Pramuk,  I have met their funky winemaker and he was in the zoom call I attended. I had remembered his enthusiasm for Zindandel from the first seminar years back and found the same level of interest in promoting their  Petite Sirah. 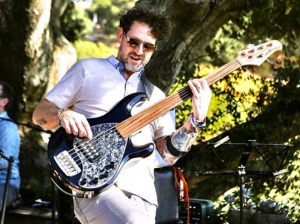 Trester or Tres as he is called Goetting at a Society of Wine Educators seminar on Zinfandel years ago. Apparently, he’s also a rocker.

If their attention to heritage vines, good farming practices and nice Italian backstory of hard work isn’t enough, the wines themselves are fantastic. I got mine as samples which was very lucky and while I know the prices are not inexpensive, they are really special.

The Palisades wine was made on volcanic soils or igneous rock, on a property that was first planted in  the first decade of the 1900s. The wine was ethereal which inky purple tones, and aromas of blueberries, violets, bramble, sweet spice. On the palate it also showed great minerality and depth with silky tannins and a long finish. It was perfect with a steak I marinated with some of  the wine, sage and Worcestershire sauce on the grill. While the alcohol was pretty close to 15%, I did not feel the heat  coming from the wine. Nor did it overwhelm the food.

The second bottle I received was called the Royal Punishers Petite Sirah and came from the Varozza vineyard in St. Helena. It was first planted in 1885 by another family but Joseph Varozza bought it in 1913. Today, Jack Varozza, Joseph’s grandson, grows Cabernet Sauvignon and Petite Sirah.  Deep black in color with gorgeous black plums,  violet and fig aromas,  the wine had a velvety mouthfeel on the palate with an herbal note, sweet spice and chocolate,  fine tannins and a long finish complete the picture.  The wines are sold on the East Coast  by New York based importer, Skurnik  or from the winery to directly. Both were very satisfying with an end of August barbecue but I can also see them with more elaborate meals in the Fall and Winter.

Join us  live on our Twitter chat on Saturday, September 12th at 11am EDT. Follow the hashtag #WinePW and be sure to add that to anything you tweet so we can see it. In the meantime, all of these posts will be live before Saturday morning’s chat.