Today’s post is about Ntsiki Biyela from Aslina Wines.  I met Ntsiki in 2010 when she was the winemaker for South African winery Stellekaya. We did a couple of events together in New York that year and I was impressed with her personally and professionally, her strength and courage and her fun loving manner in particular. So much has changed in her life and in mine since that time.

I met Ntsiki by chance. I had written a long article for the magazine Gourmet Retailer on South African wines and her importer at the time found me through that piece. It was my first foray into working with South African wines. Since then, thanks to conferences and tastings I have tasted many others that I have enjoyed. None more than the ones Nstiki now makes under her own brand, Aslina wines, named for her beloved Grandmother.

Nstiki was born and raised in Kwa-Zulu Natal. Zululand where Ntsiki is from, only got electricity in 2004, She was recruited to study at Stellenbosch and was given a scholarship by South African airlines. She moved 1000 miles away from home, from her grandmother who raised her as if I was she were daughter. Despite being one of few black women in her class, Ntsiki excelled and persevered. Thinking of all she has done, and all the obstacles she has overcome, I was thrilled to see her own line of wines now – Aslina. I chatted with her on July 3rd on Instagram about her wines and her history over the last 10 years.

Ntsiki has traveled the world, done harvests and work in France, Italy and New Zealand and now has brought her own wines to market with an ethically minded importer called Wine 4 the World.

She makes four wines, two of which I have now tried, one a Chardonnay and the other a Cabernet Sauvignon. I love the labels that have a traditional South African basket on them but instead of fruit or other crops they have grapes in them.

The Chardonnay was beautiful, a combination of new and old world aromas and flavors. At times I found it similar to a Chablis and at others to a Meursault. A portion of the Chardonnay spends time in wood but it was not oaky rather creamy and broad across the palate. I drank it over two days and it got better and better. It had beautiful acidity and was complex and persistent with apple, peach, quince and honey notes but it wasn’t unctuous or overpowering. It was restrained and powerful.

The Cabernet Sauvignon I opened this evening to continue my birthday celebrations from yesterday. I am pairing it with a Prime Rib I made and I have to say, while not a traditional South African Braai, it is a great pairing. The Cab has cedar, smoke, pepper, spice and black fruit. Ntsiki’s Cabernets at Stellekaya were marvelous and I expected this one to be as well. It had leafy, bramble and earth notes too as well as flint and chocolate. Lovely integrated tannins made the wine very complex and layered with waves of flavors coming out of the glass. Available in the US, I purchased them at Garnet in New York City and had them delivered to me in New Jersey.

I am also writing about Ntsiki today because South African wine is going through a very hard time, as you might know. Just last week, the government once reinstated a  South African Alcohol Ban. Said to be related to the spread of Covid-19 and the desire to maintain hospital beds for those infected with Covid rather than for any accidents related to alcohol, the decision is very complicated and difficult for wineries such as Aslina. I know this impacts Ntsiki’s business as well as so many others. We can support her and the industry by buying their wines.

I can’t write about South African wines without mentioning my admiration for Nelson Mandela, one of my heroes. 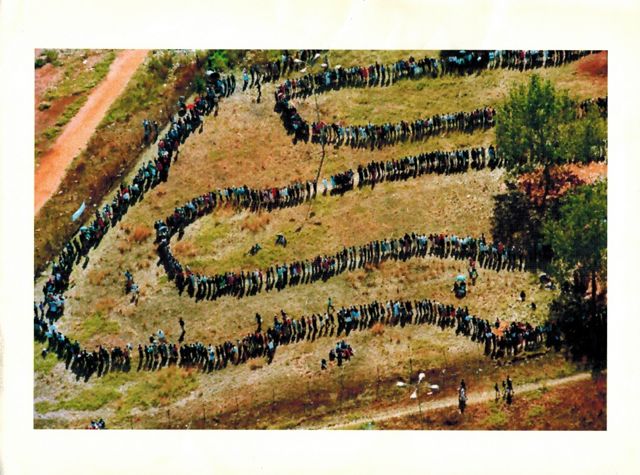 This photo was from the 1994 voting in Soweto when Apartheid had finally ended. I used to work in an office with the Associated Press and was the recipient of a cache of amazing physical photos when they went digital.