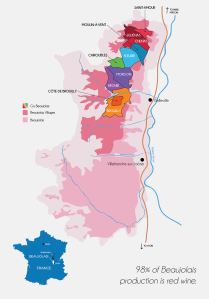 This month the #Winophiles are traveling to the Cru Beaujolais area.Our host, Cindy from Grape Experiences,  described the area in her invitation post. Before I dive into the Crus, a word about the area in general.

Beaujolais was first settled by the Romans.We can see this history in the naming of the Crus as well. The large mountain in the area was named Mont Brouilly after – Brulius, a Roman Official and Julienas, one of the 10 Crus, is named  after Julius Caesar.

From the 7th Century, the Benedictine Monks kept viticulture going in the area. Later in the 1300s, Philippe the Bold, the Duke of Burgundy, outlawed Gamay from Burgundy.

The area is small, only 34  miles long and 7-9 miles wide. It is protected by a mountain. It is divided by a river called the Nizerand River. The two areas are South and North of the river. The former is  marl and limestone and the latter schist and granite. Beaujolais AOC is produced in the South and the Villages and Cru wines in the North.

The climate is semi-continental but it is also impacted by the sea and therefore produces warmer grapes than its Northern neighbors.

The 10 Crus of Beaujolais make much more serious and delicious wines than the village wines of the Beaujolais Nouveau. All made with Gamay, some are more floral, others more fruity, a couple with bigger structure and tannins and, some are more feminine while others bigger and bolder. The Crus can rival many of the great wines of the world. The prices are higher, the wines more complicated but still all from Gamay, all from Beaujolais. I find lovely red fruit notes and flowers in Gamay. I also note something earthy and herbal. Gamay makes lovely wines for food. Roast chicken seems perfect to me but I can see it with any number of dishes.

Chiroubles, the above pictured Cru, is one of my go-to Crus for Beaujolais. I love it for its finesse and elegance. I also love to say the name Chiroubles. Chiroubles has a few key factors that make it an ideal place for grapes to grow among them, a sand called gore, lower temperatures than in the rest of Beaujolais, higher altitudes, between 820 and 1,475 feet above sea level and a slightly longer growing season. There are about 60 growers here and they make just over 2 million bottles a year.

Each Cru has its own specificity from its soils and microclimates. These run more $20-$25 and have structure and complexity. They are Saint-Amour, Juliénas, Chénas, Moulin-à-Vent, Fleurie, Chiroubles, Morgon, Régnié, Côte de Brouilly, Brouilly, from North to South. It’s an endless discovery and a pleasurable one to undertake.

GEorge Duboeuf who made a name for Beaujolais in America  passed away earlier this year. He was such a fundamental part of making Beaujolais famous in the States I have included his picture to honor that legacy. I met him and his son in 2009 at an amazing tasting and I never forgot the experience.

Please join our live chat today at 11 am ET. You can find us on Twitter via the hashtag #Winophiles.  Here are the posts my fellow #Winophiles will be posting:

Cindy at Grape Experiences, is loving “The Wines of Fleurie – An Enchanting Introduction to Cru Beaujolais”