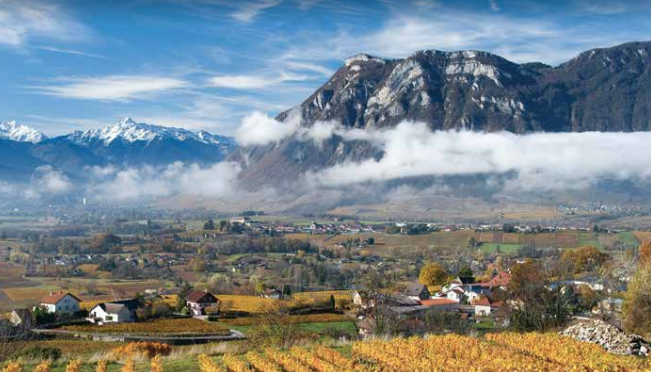 This month’s #WinePW group traveled to an area of France where Vin de Savoie are produced. Our host, Jill Barth wrote this invitation post with some information on the area. Here interview with author Wink Lorch on the region can be found here. The area is in Eastern France and borders Switzerland. I’ve been to the region three times because a French friend from Milan had a home in Chatel in the Haut Savoie. I have wonderful memories of the town, the trips, the skiing and the cheese. I believe we drank a lot of Chasselas. It was nice to visit the region again, albeit virtually. 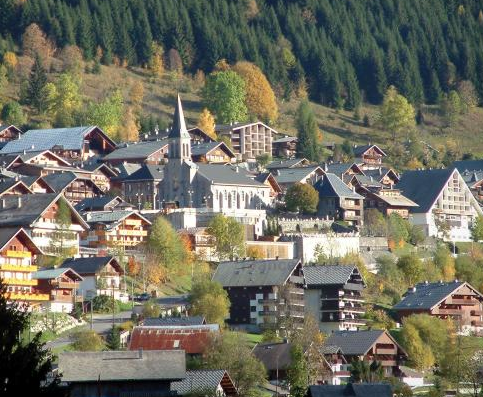 While extremely mountainous as a region, most vineyards are between 250-450 meters above sea level. The climate is Continental. Most vineyards are planted facing south as one would expect for maximum exposure and on slopes. Rain come about a 1/3 of the year but is distributed among many months. There is a risk of frost in this region but often snow on the vines protects them.

While 25 are allowed, the principal ones are Jacquère, Altesse also called Roussette, Chasselas in the Haut-Savoie, Rousanne, Chardonnay and Aligoté, Velteliner, Molette Blanche and Gringet.

Mondeuse Noire, Gamay and Pinot Noir are the most widely planted. A grape called Persan is also mentioned as are small quantities of Cabernet Franc and Cabernet Sauvignon. 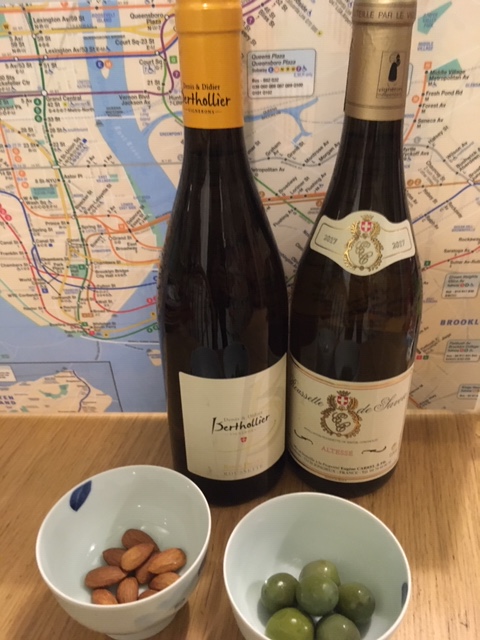 I received two samples and waited weeks to try them which was very hard but I managed.

A family affair, the family has been active since 1830 and are now on their 6th generation. In 1946, Célestin Carrel came back from a prisoner of war camp and began to run the family farm. At that time, only a very small portion of the farm was dedicated to grapes. In 1970, Eugène began running the show and specializing in grapes. In 1975 they had 3 hectares of grapes which grew to 9 hectares by 1990. Olivier, Eugène’s son joined in 1994 and they added more hectare. Today between owned and leased properties they manage around 24 hectares of vines.

The Jongieux vineyard has steep slopes and to prevent erosion, the use grasses. They are also focused on the health of the vineyards and try not to treat them and to use integrated pest management and local fauna 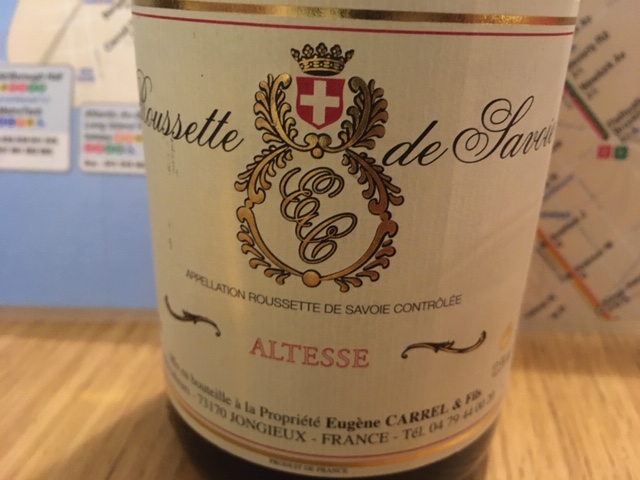 Brillant lemon in color with a bouquet of flowers and white stone fruit, this wine was lush on the palate with yeasty notes, minerality and a spicy finish. Made from Altesse also called Roussette, it has 12,5% alcohol. The soils are a clay and limestone mix. Steep slopes call for hand harvesting.  The wine goes through low temperature alcoholic fermentation in steel vats and partial malolactic fermentation as well as maturation on the fine lees until bottling.

My second bottle was from Denis & Didier Bèrthollier. The are located in Chignin, in the Southern part of the Savoy. Their farm was started by their grandfather in 1850. Like the previous winery, initially grapes were only part of what their farm grew.  Their vineyards are scattered around the hillsides with many small parcels around Chignin, Francin and Montmélian. The soils are glacial moraine and limestone scree. They grow Jacquère (white), Mondeuse, Pinot Noir and Gamay. They do not use herbicides or chemicals. They use indigenous yeasts and integrated pest management. They work according to the cycles of the moon. They are moving to organic viticulture but aren’t yet certified. From the website, they appear to be very thoughtful about all aspects of the vineyard and cellar. From the wine, it shows. 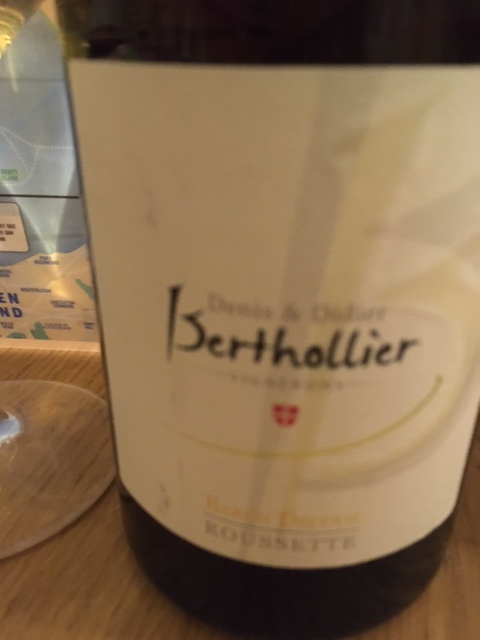 Golden in color this wine has lovely viscosity in the glass, with a rich bouquet of floral and ripe fruit aromas. On the palate, it was a delight with a savory, spicy note backed by good structure, mineral and saline notes together with nuts. A 2015, I could see drinking it now or in a couple of years. I found it very complex and elegant. 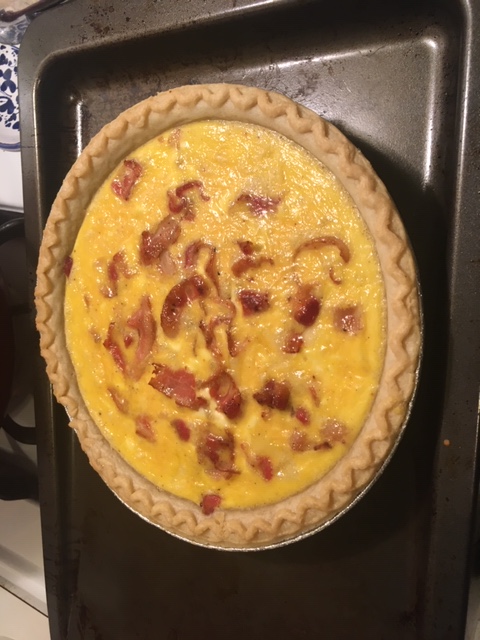 My pairing – Brie and Bacon Quiche

I made this quiche last night late following a recipe I found on Tasty Kitchen. It was surprisingly easy to make and could be a great new addition to my repertoire. It took 15 minutes to make and 45 to bake. Even late on a Friday night with a five year old, imminently feasible. The recipe is for six people but I think more could enjoy it. Perfect with a salad. It will be my Mother’s day brunch for my Mamma.

I thought the wines would offset the bacon and cheese flavors but not be overwhelming. I was right. They picked up the savory notes of the bacon and the cheese but also cut through the heavy cream.

Crumble cheeses in the bottom of the pie. Spread crumbled bacon on top. Mix all remaining ingredients thoroughly and pour into the pie pan.

Bake in a preheated 375 degree F oven for about 45 minutes, until a pick inserted in the center comes out clean. Cool slightly before serving.

Join us as we explore the region and the dishes we choose to make. The chat starts at 1100AM EST. You can find us and join by using the hashtag #WinePW. Check what my fellow bloggers have to say:

Nicole at Somm’s Table is “Cooking to the Wine: Altesse Roussette de Bugey Montagnieu with Crab and Veggie Gratin”

Liz from What’s In that Bottle shouts about “Alpine Wine Alert: Wines from France’s Savoie Region are Awesome”

Gwendolyn at Wine Predator is making “Chicken and Savoie for Sweethearts, Fondue for Friends #WinePW”