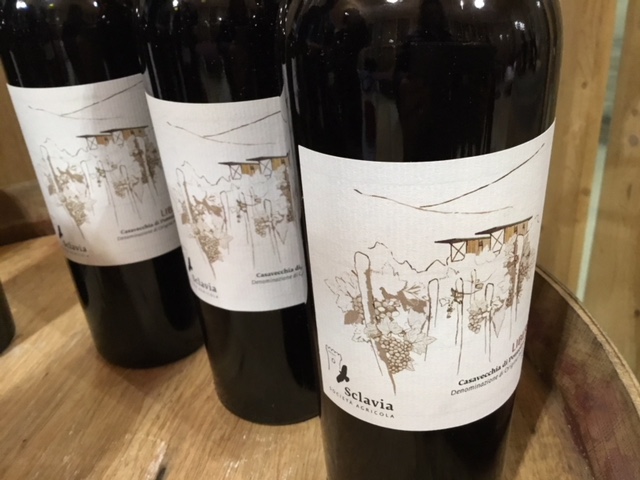 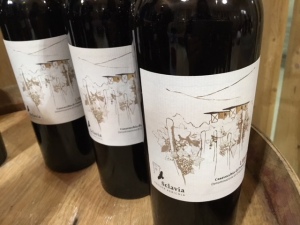 On the first evening of Campania Stories, we were invited to a dinner at Sclavia where we tasted some of his wines that are labeled Terre del Volturno. We met his lovely female oenologist canmed Anna Della Porta. The winery was founded in 2012 and has 13 hectares. I tasted their Casavecchia di Pontelatone DOP called Liberi.

The grapes grow at 500 above sea level. The soils have clay with limestone. The wine fermented in stainless steel after a long maceration and ages for 24 months in barrique. It was a very hearty wine with spice and savory notes. I had never had a Casavecchia before. I found them to be quite different one from another but each with a rustic note that reminded me of a wine from the Veneto called Raboso. 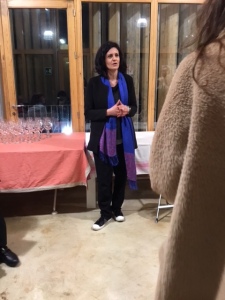 Anna the oenologist, pictured above was lovely and very young. I was impressed with how many female oenologists and wine owners I met in Campania. The Sclavia family invited all of the producers from the Caserta province who were participating in Campania Stories to show their wines. I loved that they were all there together in an informal setting. 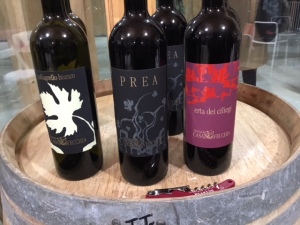 We also tried wines from Viticoltori del Casavecchia.
The winery was founded in 1999 and is a cooperative with 5 hectares. They are a group of 40 members who have joined their vineyards together to create these wines. Some of the vines are on their own rootstocks and are very ancient. Like Sclavia, they are located in the hilly inland part of Caserta.

I tried their Pallagrello Bianco 2016, and two wines made from Casavecchia, Erta dei Ciliegi and Prea. My favorite was the Pallagrello Bianco, a grape that I like a lot which has considerable minerality, nice acidity and wonderful peach and pear aromas. Apparently it is a very ancient grape and was planted in the fan-shaped vineyard by Architect Vanvitelli in 1775. Vanvitelli was the architect of the Reggia di Caserta, Campania’s version of Versailles.

It fell into disfavor after the phylloxera epidemic but has had a resurgence. It can also be made into late harvest wines because it is can be easily dried. 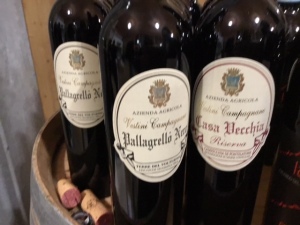 Together with other journalists I was given a ride from the Reggia di Caserta to Sclavia by the owners of Vestini Campagnano-Poderi Foglia. Lovely and generous as well as funny, I was excited to taste their wines after having spent time with the owners and I wasn’t disappointed. Their winery was created in 1999 and they have 10 hectares. They also have a female oenologist named Emilia Tartaglione. Their soils have clay

I tried the Pallagrello Nero and their Casavecchia Riserva. The Pallagrello Nero was very interesting, a new grape to me, with lovely spicy and pepper notes, loads of color and juicy tannins. It too was planted in Vanvitelli’s fan shaped vineyard in 1775 and was also in disuse post phylloxera.

The Pallagrello nero ferments in stainless steel and then spends 12 months in barrique and 12 more in the bottle. 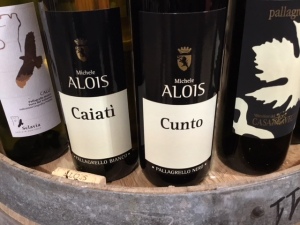 Of the wineries in this area, Alois was the only one I had heard of previously. Founded in 1992, the winery has 20 hectares. Their oenologist is Carmine Valentino.

I tried the Caiati 2016 amd the Cunto Murella 2014. The first was Pallagrello Bianco and the second Pallagrello Nero. I thought they were both terrific. Grown on clay-calcareous soils at 280 meters above sea level. The Pallagrello bianco spends time on the lees and then in the bottle. I liked the texture of this wine a lot. It was rounded and creamier than most of the others I had tasted from this variety.

The Pallagrello Nero spent 18 months in large barrels of 25 hectoliters and 12 months in the bottle.

We also tasted wines from a few other producers of Terre del Volturno wines but I don’t have pictures of the wines, Aia delle Monache, a small winery with 2 hectares, Cantina di Lisandro who had a beautiful Pallagrello Bianco Lancella 2016, Nanni Copè whose wines were interesting blends of indigenous varieties and Tempio di Diana whose Pallagrello Nero called Antonvino, dedicated to a special friend of the winery, was unique and intense of the palate made by Danilo Trabuco.

Tomorrow, I will write about the wines from the other area of Caserta that I mentioned yesterday, Falerno del Massico.