Today is #worldmalbecday, April 17th. I’m reposting a piece I wrote a number of years ago about Argentina and Malbec with tango mixed in.

As any tango dancer worth their salt knows, Pablo Varron starred in the 1997 movie The Tango Lesson directed by Sally Potter as well as many other famous shows. That movie inspired me and many other people to start dancing tango. The soundtrack is still one of my all time favorites. I love songs like this one, Milonga di Mis Amores . Melancholy tangos are only one part of tango, the milongas, like this one, are generally more playful songs. I love both.

Thanks to the tango, I developed a taste for Argentinean wines. At the milongas or dance halls, they generally serve only Argentinean wines. At first, the only brand anyone carried was Navarro Correas, easy drinking wine at a fairly low price point. That was fine because when dancing tango, you really can’t have too much to drink otherwise it is hard to stay on top of those lovely heels… 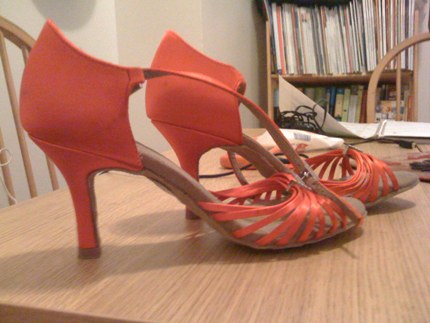 Some milongas have since branched out and are now offering a wide variety of Argentinean wines. Pushed by a desire to try the wines and to dance the tango, I went to Argentina in March of 2007. It was an eye opening experience. I went to Buenos Aires for a very short time and tried to go to the dance halls. It was quite shocking to see how different the dancing was there and how much more intense and difficult it is there than in the United States or Italy. The style is much tighter and the movements are very restricted because of space constraints. While my tango wasn’t what I might have wanted, I loved Buenos Aires, a combination of Paris, Palermo and Seville all rolled into one. 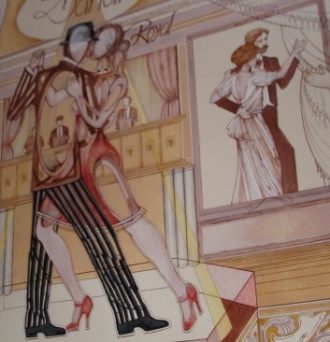 I stayed in the San Telmo neighborhood at a tango hotel, the Mansion Dandi Royal. Tango is performed in the streets in Buenos Aires including in places like La Boca, a neighborhood well known for its colored homes which were initially painted by fisherman from Genova, Italy at the end of the 19th century. Tango is said to come from this area and at its inception was danced by men with other men as they waited their turn to visit the ladies of the night…

The neighborhood is also very famous because of its soccer team Boca Juniors. When I was there, I thought I saw Maradona, the coach of the Argentinean national team who is currently falling out of favor as the team’s entrance into the 2010 World Cup in South Africa begins to look doubtful. Still a favored son, there is a look alike (a sosia in Italian) who parades around La Boca so silly tourists like me can fall for the gag and take pictures. 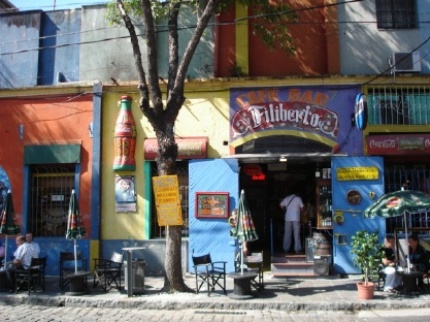 I also stayed in Recoleta at a chic little hotel called the Art Hotel. Recoleta looks and feels like Paris. I highly recommend the experience. One of things people do in Buenos Aires is visit the nearby cemetery where Evita Peron is buried. I dutifully went to see her tomb and the many other beautifully sculpted monuments. It reminded me a bit of Cimitero Monumentale in Milan. I had never seen such elaborate tombs.

In addition to wine and tango, I love art so this was a heady experience for me. Buenos Aires has many art museums including the Museo de Arte Latinamericano de Buenos Aires or the Malba where Latin American artists are featured, I discovered many painters that I knew nothing about from Brazil, Uruguay and of course, Argentina.

Argentina also has a long, complicated political history, forever marked by the period of the desaparecidos which ran from 1976 to 1983, when thousands disappeared and were murdered by the military. Protests continue to this day in front of the Casa Rosada, is the Argentinean President’s palace. 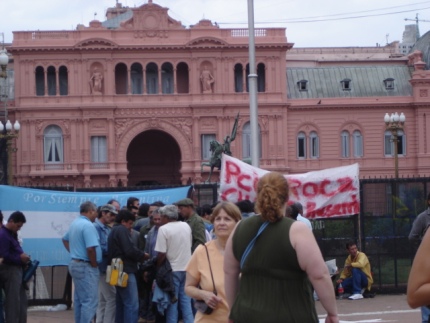 While that terrible history will not disappear, Buenos Aires is a very cosmopolitan city with numerous neighborhoods, a financial center, a design center, a port called Puerto Madero and beautiful gardens. This fabulous bridge known as the bridge of the woman was built by Santiago Calatrava and is said to represent a couple dancing tango. It is wonderfully lyrical. 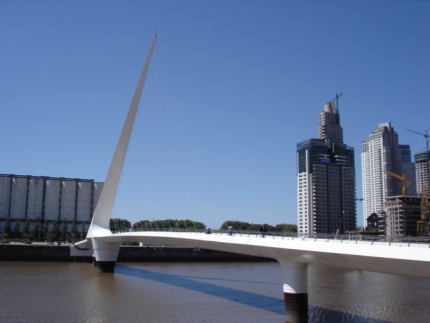 Palermo Viejo, a very posh neighborhood reminded me of Georgetown in Washington D.C and some stately homes in New Orleans. Lush and green with maids running around in uniforms and gardeners at work, it was a very calm oasis after the crush of some parts of the city. 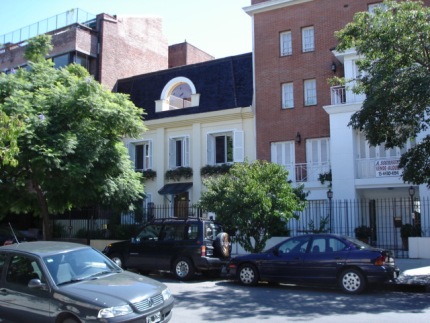 After all this sightseeing, I needed a drink and finally went to meet a friend in Mendoza, the wine capital of Argentina. Of course, I ran into Robert Duvall, the actor and avid tango fanatic in the airport. His movie Assassination Tango starred Pablo Veron and a former teacher of mine as well, Armando Orzuza who now teaches in Central Italy.

Mendoza is a beautiful little city that has been transformed by the popularity of Argentinean wines. It is also home to a fabulous restaurant where I had the best steak of my life, except for the one at Peter Lugar’s where I had my first solo dinner with my dad when I was 10 years old and literally wearing white knee socks…

Francis Mallman’s 1884 is a delight both for the ambiance and the food. Located in an urban winery Bodegas Escorihuela, it has been called one of the 10 best restaurants in the world. I had a succulent wonderful steak that melted into my mouth. It was pure pleasure and we drank it down with a lovely bottle of Primus Malbec from Bodegas Salentein. A superb wine. Malbec, originally a French grape, has found a home in Argentina and makes big, juicy wines there with hints of red fruit, vanilla, chocolate, spice and tobacco and often powerful tannins. This winery is located in the Uco Valley and is well known for their Malbec, Merlot and even some Pinot Noir.

My friend was looking to import Argentinean wines into Italy so we had the pleasure of meeting with some producers independently. We met Roberto Cipresso, the winemaker at Achaval Ferrer. Roberto has since become a friend but at the time, I had no idea who he was. A world famous enologist, he spent about three hours with us tasting from his barrels with a wine thief. I was overcome with delight and didn’t take a single photo but it is all imprinted in my mind. The Finca Mirador, a delicious Malbec and the Quimera, a blend of Malbec, Cabernet Sauvignon and Cabernet Franc were among my favorites together with the Finca Altamira, also a Malbec. The wines displayed red fruit and minerality, typical of wines from Mendoza but the Mirador is a more robust wine while the Quimera is arguably more nuanced, perfumy and bordeaux like in style. Roberto has a lot of ideas about terroir, wines and almost everything under the sun. He is a truly imaginative person and a terrific winemaker.

Another winery that I really liked was Nieto Senetiner. The Don Nicanor series are wines that I buy often in the USAl, both the Malbec and the Merlot.

This winery has over 300 hectares. In addition to Malbec, Merlot and Cabernet Sauvignon, they also make Tempranillo and Syrah. While enjoyable, I preferred the other varieties. 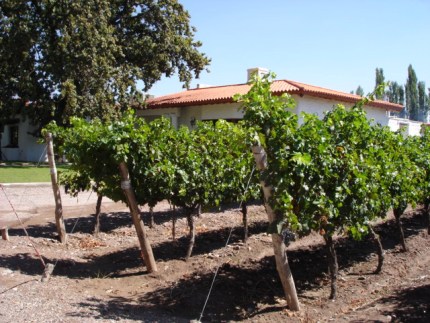 Another pretty large winery in Mendoza is La Rural. The winery was started by Don Felipe Rutini, an Italian immigrant from Le Marche, Italy. La Rural was founded in 1885 and houses a wine museum. Rutini was among the first to plant Cabernet Sauvignon in this region.

In the late 1990s, Nicolás Catena, became a partner in La Rural. This has brought much innovation to the winery. La Rural makes red and white wines, as well as sparkling wines of some note and a dessert wine. In addition to the top red varieties, sauvignon blanc, semillion, gewurztraminer and chardonnay are also grown. Of particular note are the Malbec, the Trumpeter Cabernet Sauvignon and the San Felipe Extra Brut sparkling wine. 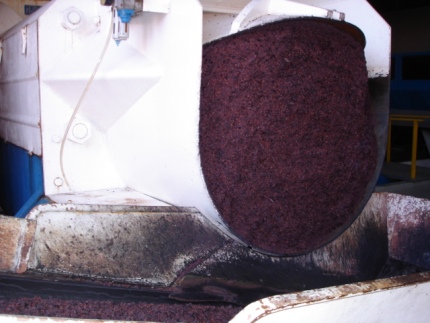 The Italian influence can be seen everywhere. In Argentina, if you don’t speak Spanish, try Italian. Some 60% of Argentineans claim Italian heritage.

After these very large concerns, we ventured off to check out a boutique winery called Carinae Vinedos y Bodega. Run by a French couple who fell in love with Argentina, the winery is small and family run but it produces some spectacular wines. While they may be small, they seem to have spared no expense with their wine making, hiring world renowned consultant Michel Rolland as the consulting enologist. They were the first to explain the Argentinean irrigation system to me as well. Water from the Andes flows into the vineyards at specific times according to very complex regulations which use a system put into place by the indigenous Huarpe people many centuries ago. Channels bring water from the Mendoza river to the arid plains , an amazing engineering feat. Carinae bought older vineyards and has some 80-85 year old vines.

While not particularly a fan of Syrah from Argentina, I did find theirs to be exquisite. I also liked the Gran Riserva Malbec and Prestige, a blend of Malbec, Syrah and Cabernet Sauvignon.

It’s hard to express how beautiful this region is without being extremely cliche. While driving through areas that often look like parts of Italy, you are constantly aware of the gorgeous backdrop – the Andes. 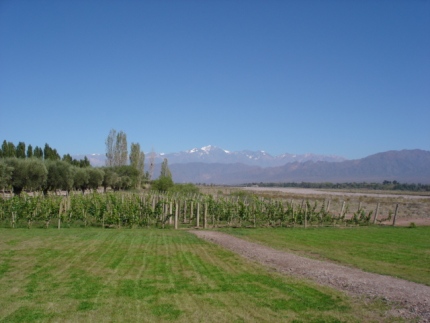 One of the wineries we visited was Dona Paula, owned by the Claro Group, a Chilean concern. We had an appointment and were driven around the vineyards which seemed to extend for many miles. We tasted a number of their wines but the ones that I remember most vividly were the Chardonnay and the Malbec. I tasted a number of Chardonnays while in Mendoza but their was my favorite without a doubt. They also produce wines from Sauvignon Blanc, Viognier, Syrah and a Tannat blend.

It was pouring rain the day we visited so we did our tasting and hada lovely lunch in a little building overlooking the vineyard. Non male… 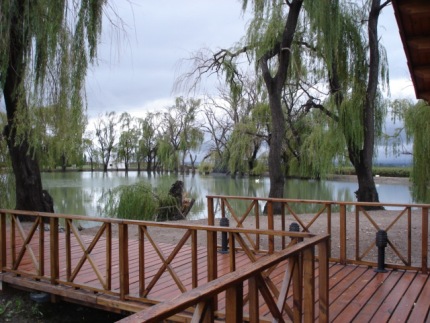 As you can see, I loved Argentina and can’t wait to go back for a visit, to try more wines, dance more tango and visit its natural wonders, such as the Argentinean side of Patagonia. In the meantime, I will have to be content with drinking the wines that are available here in New York and going to the local milongas. Thanks to the tango calendar put together by an avid fan, Richard Lipkin, you can always find a little bit of Argentina in New York.

9 thoughts on “Argentina, Malbec and me. April 17th #worldmalbecday”