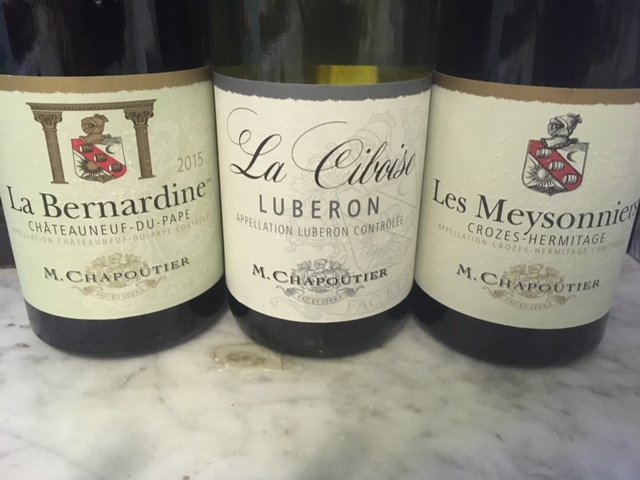 I’m a new comer to the French #winophiles group. It’s been a really interesting adventure and I couldn’t be happier getting back to my first love. While many people know of my connection to Italy, the real truth is that France and all things French were my first love. I lived in Dijon during University, was a French major in language and literature in college and to this day associate much of my childhood with trips to France (read Dad’s love of French culture). Everything’s better in France he would say when I was growing up. Visiting the country, drinking the wines and eating the food, I can see why.

Today’s post is about wines that I was given as samples from Michel Chapoutier. The three wines which come from different areas of the Rhone Valley are very representative of their individual terroirs. The Rhone Valley is my go-to area on any wine list when I do not know the wines or producers. I have heard it said, when working retail as well, that the Rhone has something for all palates and price points and I think that is a truism. Michel Chapoutier it seems also has wines for everyone. Through the years I have tasted a host of wines from this exciting winery but never the three that I tasted for this post.

Michel Chapoutier’s great-, great-, great-grandfather Marius purchased an estate and some vineyards in Tain l’Hermitage in the Northern Rhône Valley. The winery was founded in 1808. Marius was the first to make his own wine from his grapes rather than sell them.

Michel Chapoutier is the 7th generation to run the winery which he took over in 1990. He has made the winery 100% biodynamic viticulture and has eliminated all fining and filtration. 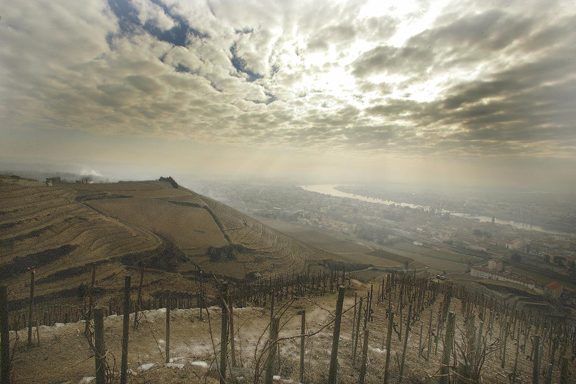 The family motto is latin fac et spera, or “create and hope.” This is Michel’s philosophy and is emblematic of his minimal interventionist philosophy. He believes in letting Mother Nature do her work.

I knew some of the history of the Chapoutier winery so I was excited when the wines arrived at my house and thought about what I could make for each one. I settled on baked salmon with the Luberon, a steak with the Crozes and lamb chops with the Chateauneuf-du-Pape. I’m not sure my pairings were spot on. The salmon worked beautifully but the other two needed bigger sauces to complement the wines which were brimming with spice.

The first wine I tried was the Luberon La Ciboise Blanc, made with a blend of Grenache Blanc, Vermentino, Ugni Blanc, and Roussanne. I loved the texture of this wine which was enhanced by the ageing on the fine lees. It showed lovely fruit aromas of citrus and peach but also toast from lees. La Ciboise was the name of Michel Chapoutier’s grandfather’s home in Tain l’Hermitage. The home was the center of family life and a spot for gatherings. This wine is representative of that everyday joie de vivre. I could definitely see this as a house white wine, delicious and at a nice price point of $13.

Luberon is located in the southeastern Rhône Valley. An ancient wine region since 750 BC. While vines were probably brought by the Greeks, the Romans really brought wine alive here. It also flourished in the Middle Ages when the papacy was in nearby Avignon. Luberon received its AOC appellation in 1988. The vines here are graced with a Mediterranean climate, but thanks to altitudes of between 200 and 450 meters for the vineyards they also benefit from breezes and diurnal temperature changes. It’s considered one of France’s sunniest areas. The soils are a combination of sand, limestone and red clay.

The region has a nature reserve park was designated by UNESCO as a living model of sustainable development. Whites, reds and roses are made here. Most of the wines are blends of grapes like the one I tried.

The second wine I tried was the Crozes-Hermitage Les Meysonniers Rouge . Made from Syrah, the wine was inky black, with black fruit and spicy aromas and flavors. It had great structure and length and a very long finish. I had it with a steak which was a simple pairing. Perhaps a more involved sauce would have been appropriate but like Michel Chapoutier, I’m a minimal interventionist in the kitchen. Made from 25 year old vines, the vineyards of Crozes-Hermitage surround the great Hermitage Hill, and are cultivated under organic practice. It retails for about $38

Crozes-Hermitage vineyards are on the left bank of the Rhone River on the 45th parallel. The reds are made with Syrah while whites with Roussane and Marsanne. Some 92% of the wines are red while 8% are whites. The appellation was created in 1937, and then expanded in 1956. The land used to be covered in orchards and woods. It’s the largest of the Northern Rhone appellations and therefore has different climates and soils because it covers so much territory. In the North, it has constant winds that blow albeit it is mild in climate. In the South, the climate is more Mediterranean although winters can be cold and September can see harsh rains.

Here too the soils are varied. In some areas there are thick layers of pebbles mixed with red clay. Others have white sand, granite soils and loess. There are also different altitudes and slopes with some plateaus and some steep hillsides. 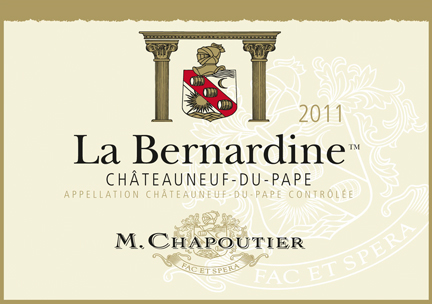 The third wine I tried was the Châteauneuf-du-Pape La Bernardine Rouge made from 90% Grenache, 10% Syrah. I loved it. It was deep ruby in color with red and black fruit, leather, spice and juicy, plush tannins. Structured and balanced despite high alcohol, it had a long finish and was definitely one to remember. Priced at about $53.

This wine is vinified in concrete tanks and undergoes a long fermentation to ensure color and tannin extraction. Châteauneuf as we know has a long history, since the papacy was in Avignon in the 14th century. The popes drank the local wine of course. Châteauneuf-du-Pape is well-known for its amazing soils, large pudding stones from the river.  I should mention that Chateauneuf is among the driest areas  in the Rhône Valley. Loads of sunshine and impacted by the Mistral,  those famed stones keep the warm and heat the vines, even through cool nights.

Most Chateauneuf-du-Pape wine have more grape varieties in their blends, Chapoutier only uses two while 13 are allowed by AOC law.

I must mention the Braille Labels that they produce in homage to one of Hermitage’s most famous sons, Maurice de la Sizeranne. Chapoutier made his first Braille Label in 1996.

This famed son of Tain was born in 1857 and went blind at the age of nine. He founded the Revue du Braille and is credited with perfecting the system of abbreviated Braille widely used in France. He also authored many books and was a philanthropist. The Sizeranne family also owns land in the Heritage appellation. Sizeranne, in fact, is where Chapoutier sources the fruit for one of their most famous wines, Monier de la Sizeranne.

So much more to say about these wines and this producer. Luckily, there are many more posts about them by my fellow French #Winophiles. Check out these posts on the wines of the Rhône Valley and Michel Chapoutier, and join us Saturday morning, March 17 at 11 a.m. EST on Twitter. Use the #Winophiles hashtag to join the conversation.

Our host, Liz Barrett at Whats in that bottle? shares “Get to Know the Rhône Valley with Michel Chapoutier #Winophiles.”

J.R. Boynton from Great Big Reds writes about “The Dark Side of Syrah, with Domaine Fondreche Persia 2012 (Ventoux)”

Rob Frisch at Odd Bacchus writes about “Return to the Rhône”

Rupal Desai Shankar at Syrah Queen writes about “Chapoutier: King of the Rhône”