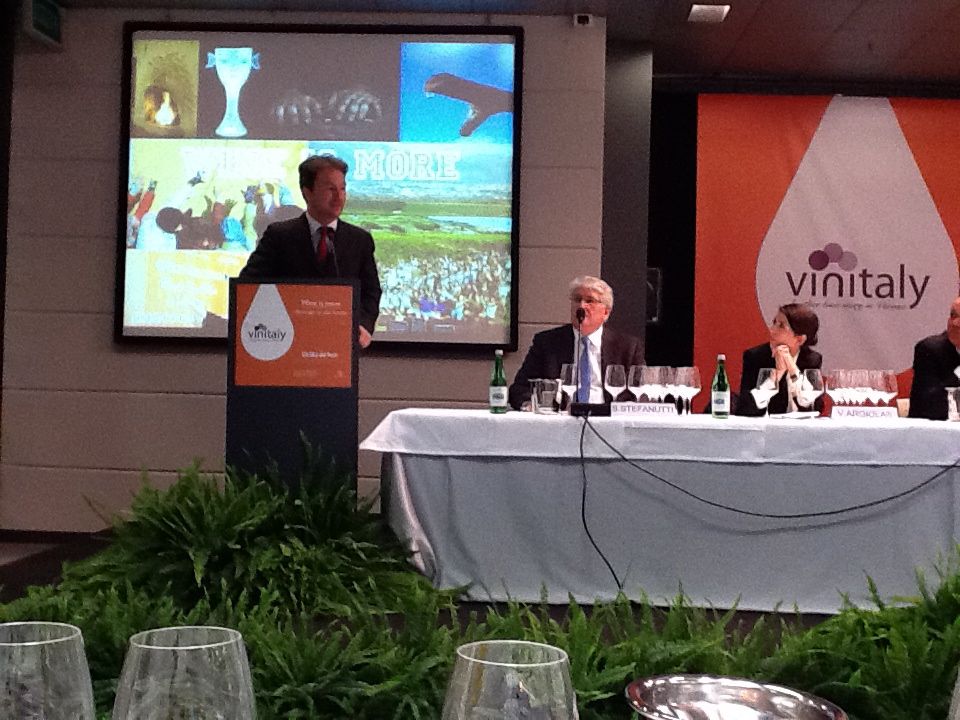 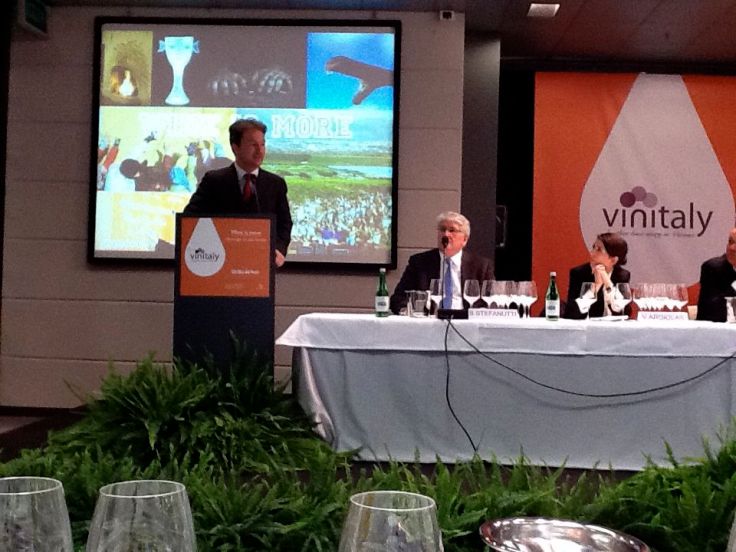 As Vinitaly approaches again, I have been going through my notes to see which producers I want to visit this year and what I have tasted and written about in the past. Of course, as happens to the best of us, numerous articles that I promised I would write last year didn’t get written. Not for lack of trying but for lack of time. Evidently I haven’t broken the habit of needing a deadline, formed when I was a young and further developed when I was a newswire journalist in Milan. Something about the pressure to write on deadline makes me get things done. I wish this weren’t the case and I guess that is why I am taking forever to write the book I have in mind. Musings about why things don’t get done are even less interesting to someone else than they are to me so enough of that…

“Wine is more – Message in the bottle” was the theme of the tasting I attended which showcased ten top producers and the socially-minded activities that their wineries fund or support in one way or another. I often work with non-for-profits and was particularly touched by the content of this seminar.

The first winery was Villa Russiz from Capriva del Friuli. The winery was created in 1869. The Villa Russiz has a foundation which manages their 90+ hectares and is a home for children in difficulty. Children from the age of 3 to 14 live in the home when they have been removed from their family homes which allows them support and a safe and loving environment.

The winery is also very active in the arts and signed an agreement with the Hermitage in Saint Petersburg to study the theme of wine landscapes in painting. The wine that we tasted was one made for the Hermitage with a special label to celebrate the museum’s 250th anniversary.

This white wine is the official wine of the Hermitage for the coming years thanks to the agreement they signed. The wine is from 2011 and was a 100% Tocai Friulano, Friuli per l’Ermitage, Collio D.O.C.

The next winery was Argiolas from Sardinia. Valentina who I have interviewed in the past, showed a beautiful film about the institutions her family has helped to create in the Democratic Republic of Congo together with the non-for-profits Africadegna and L’Associazione Alerte Solidariete Sante. The Argiolas family has helped to build a medical center and has helped to make sure that it can be self-sufficient even in terms of energy. The project is called Iselis and two wines were made to support and symbolize this initiative – Isola dei Nuraghi Igt Bianco e Rosso.

The wine we tasted was the Iselis Rosso made from 85% Monica, 10% Carignano and 5% Bovale Sardo. The wine spends time both in concrete where it undergoes malolactic fermentation and then spends another 12 months in barrique and six months in the bottle before being released into the market. According to Valentina, Monica is a great grape for aging while Bovale Sarda adds structure and backbone to the wine.

The wine was deep ruby red in color with an intense and persistent bouquet of herbs, earth, spice and pepper. On the palate it was dry, full-bodied, with ripe juicy tannins. 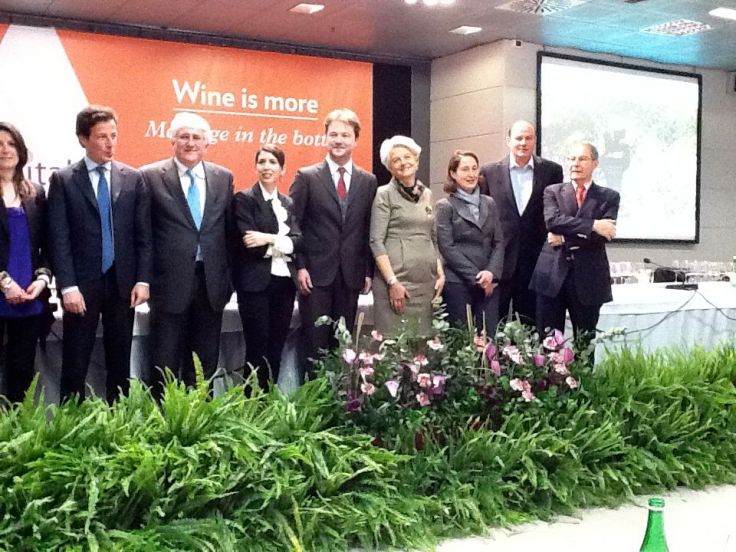 Michele Chiarlo from Piedmont was the third winery in the line-up. The Chiarlo family has created a one of kind artistic park using works by Emanuele Luzzati. Works of art dedicated to the themes of the elements – air, water, fire and earth, are interspersed between the vines. Every year the family hosts a festival of art, theater and film in the Orme su La Court park.

The wine we tasted was the La Court “Nizza” Barbera d’Asti Superiore D.O.C.G. 2010. The wine spends 12 months in French oak, half of it spends time in barriques for 12 months. The wine then spends a second year in the bottle before release. Chiarlo was particularly pleased as he described how his father wanted to make a great Barbera in Piedmont, up to the task of competing with Barolo and Barbaresco.

The wine was a deep ruby red with intense and persistent black fruit aromas. On the palate it was dry, full-bodied with good acidity, rich cedar and oak flavors as well as chocolate notes. The tannins were ripe and welcoming, the wine velvety and enveloping. 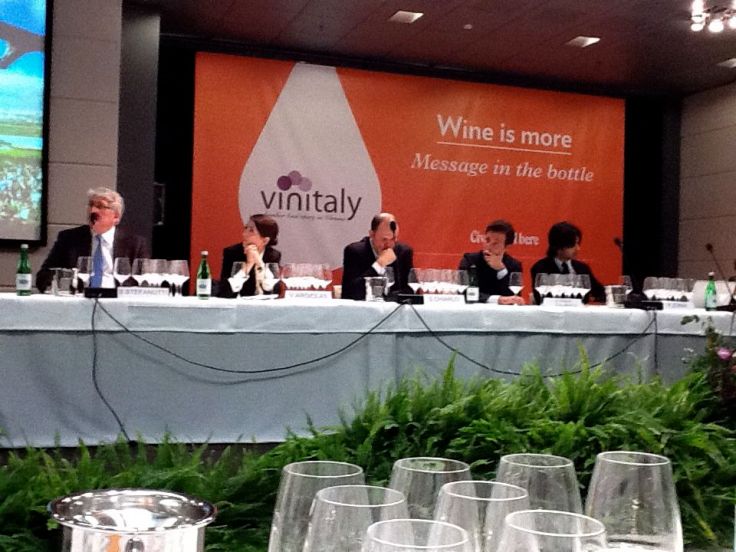 The fourth winery was Tasca d’Almerita from Sicily. In its 8th generation, Tasca is at the head of a group of wineries working on a project called SOStain that is involved in protecting the environment. The mission of the project is to promote sustainable agriculture. Tasca is convinced that the responsibility of each producer is to make great wine and to protect the land and the local flora and fauna while doing so. They have also created a mini-agricultural group called Naturaintasca that involves a group of local farmers who work with typical Sicilian products. Alberto Tasca d’Almerita showed a film I just loved about his family but I can no longer find it on the website. At a certain point in his speech, Alberto said the following line which I really appreciated as well, “We didn’t receive the gift of our lands from our fathers but as a loan from our children/Non abbiamo ricevuto la terra in eredita dei nostri padri ma in prestito dai nostri figli.” So much more to say about this project but I will write about that at another point.

The wine we tried was the Riserva del Conte, Contea di Sclafani D.O.C. 2010 made from 67% Perricone and 33% Nero d’Avola. The grapes are vinified together with ambient yeast, maceration lasts for 25 days during which time malolactic fermentation takes place. The wine then ages in 500 liter wooden barrels made from Chestnut wood for 26 months.

Ruby red in color with developing aromas of earth, fruit, animal skin and bacon, the wine was dry and full-bodied on the palate with flavors of oak, chocolate, and vanilla. It had sweet ripe tannins and a velvety mouthfeel.

The fifth winery was Casa Vinicola Zonin from Gambellara (Vicenza). Originally, they had only property in the Veneto but now are among the largest wine companies in Italy and in Europe with 1,800 hectares under vine. They are working on a project called Tergeo together with Unione Italiana Vini and other research institutions. At the core of the project is the concept that there are ethics to sustainability in terms of protecting the landscape, energy, education and of course, viticulture. In terms of the landscape, they look to protect biodiversity, in terms of energy to be self-sufficient, in terms of education they look to promote more of it and in terms of viticulture, they are moving towards biodynamic viticulture, already in place in Sicily at their winery Feudo Principi di Butera. In the Maremma, they are practicing organic composting at Rocca di Montemassi.

The wine we tried was their Rocca di Montemassim Igt Maremma Toscana 2010 made from 50% Cabernet Sauvignon, 25% Syrah, 15% Merlot and 10% Petit Verdot. Each grape variety is harvested and vinified separately in stainless steel and then aged in 350 tonneaux of first and second use for one year. The wine was a deep ruby red in color with persistent aromas and flavors of oak, bacon, fruit, and earth. The tannins were refined and ripe and the finish was long. I also found minerality in the wine which Francesco Zonin said came from the soil composition in this part of the Maremma.

I’m going to split this post into two parts like I did last weekend otherwise it will be too long for anyone to want to read. The experience though was very memorable and the stories and the wines powerful.